McCain: 'I will veto every single beer' 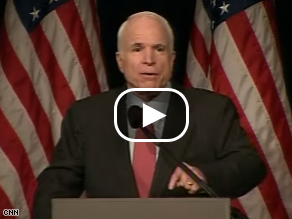 (CNN) - John McCain issued a promise Tuesday that may cause a bit of unrest with a broad swath of voters:

In a slip of the tongue while railing against excessive earmarks at the National Small Business Summit in Washington, the presumptive Republican presidential nominee inadvertently pledged to veto the popular alcoholic beverage.

Watch McCain's slip of the tongue

"I will use the veto as needed. I will veto every single beer - bill with earmarks," he said, as rumblings from the crowd could be heard. "And every single bill that we have come across my desk I will make them famous. I will veto them, you will know their names."

It's not entirely surprising McCain has beer on the brain: his wife, Cindy, is heiress to her father's Arizona beer distribution company, Hensley and Company, one of the largest distributors in the U.S., for which she now serves as chairman.