Paul: 'People will have a chance' with Barr 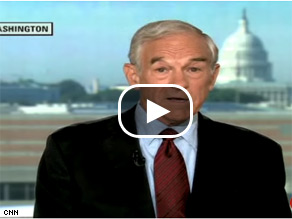 Paul, who never officially ended his own Republican presidential bid, told American Morning Anchor John Roberts, “[Barr] talks our language, so I do really believe that he can have a very positive effect in this campaign and let the people know that limited government is a very, very important message.”

Echoing the principals he based his own presidential run on, the Texas congressman said Americans’ voices will be heard with Barr, and he “gives everybody a choice in the matter.”

Barr, who was a former four-term Republican congressman from Georgia, left the GOP to join the Libertarian Party in 2006 and officially won the its presidential nomination late last month.

Asked of speculation surrounding the creation of his own convention in September, Paul said he and his supporters won’t be there to cause problems for the Republican Party.

Paul, who has made it clear in past interviews he will not support John McCain because of their differing views, said again Thursday he disagrees with the Arizona senator on foreign policy and economic relief.

“I would say [McCain] does not represent limited government values, and the republicans deserve to hear the other side of the story.”

Programming Note: Republican presidential candidate Ron Paul will be in “The Situation Room” Friday. What would you like to ask him? Put your question on video and you could be featured on CNN.