McCain: Treat our wives with respect 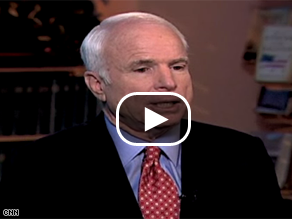 (CNN) - John McCain said Friday that every candidates' wife "should be treated with respect and if there's any disrespectful conduct on the part of anyone, those people should be rejected.”

“I have the greatest respect for both Senator [Barack] and Michelle Obama. … I've never met her, Mrs. Obama, she's a talented and a very effective person. And I admire both of them. We have stark differences in views,” he told CNN's Dana Bash in a one-on-one interview.

“Americans want a us to have a much more respectful campaign than the kinds they've been seeing recently.”

The comment comes a day after Obama’s campaign launched a new Web site, Fightthesmears.com, which aims to debunk rumors against the Illinois senator and his wife.

McCain also touched on his own vice presidential vetting process - and whether he's considering former Massachusetts Gov. Mitt Romney as his running mate.

Romney, who had clashed with the Arizona senator during the Republican primaries over economic issues , has campaigned for McCain since suspending his campaign.

McCain, however, sought Friday to downplay the negativity between the two during the hard-fought primary.

“There were specific comments and times that are made in primaries, but overall, I'm proud of the kind of primary that all of us waged. It was - with a few exceptions - a very honorable primary, which allowed us all to come together," he said. "And as I have gotten to know Mitt better, and his wonderful wife, Anne, we have become quite friendly.”

The presumptive GOP nominee also said that it’s important for the vice presidential vetting process to play out.

“One of the things about this is that sometimes, if you aren't careful, we've seen in history, that it's harmful to the ticket. And that's one of your first criteria, to make sure that there's nothing out there - the people who you are really considering that they would not have a harmful effect on the ticket, or some - so that is one of the reasons why you look very carefully early on at just about everything and try to get some help in doing it.”

McCain also touched on his proposal for joint town hall meetings with Obama, saying “I think Americans, one of the reasons I wanted so badly to have the town hall meetings, so they have a chance to look at us and respond to them, rather than the soundbites and the spin and the Web sites and the 527s.”

He has called for a total of 10 unmoderated town halls between now and August. The Obama campaign, however, rejected the proposal.

McCain’s campaign recently sent a letter to the Obama campaign urging the debates after receiving invitations by the Ronald Reagan and Lyndon B. Johnson Presidential Libraries to hold joint town halls meetings.

In a statement Friday, Obama's campaign manager David Plouffe responded to the letter saying the presumptive Democratic presidential candidate offered to meet McCain at five joint appearances between “now and Election Day” – which would include three traditional debate “plus a joint town hall on the economy in July and an in-depth debate on foreign policy in August.”

“That package of five engagement would have been the most of any Presidential campaign in the modern era – offering a broad range of formats – and representing a historic commitment to openness and transparency.”