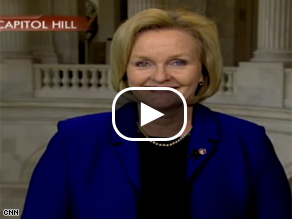 Watch McCaskill's comments on the veepstakes.

(CNN) - Is ardent Barack Obama supporter Claire McCaskill interested in the No. 2 spot on the Illinois senator's presidential ticket?

The Missouri Democrat, who has long been an outspoken backer of Obama's presidential bid, didn't exactly shoot down that notion in an interview with CNN's Wolf Blitzer, though she did say she expected to be staying put in the Senate.

"I have complete trust in Senator Obama's judgment in this regard," McCaskill said when asked if she thinks she may be on his shortlist of potential running mates.

"And I can't wait to help president Obama swing some really strong punches for change as a senator from Missouri in the United States Senate," she added with a smile.

Winning Missouri has long been considered as an important component to capturing the White House. In all but one election since 1904 the state has voted for the winner of the presidential race.

McCaskill's comments come a day after Obama told McCaskill's hometown newspaper, the St. Louis Post-Dispatch, that there are "very few people" who he is closer to.

"There are very few people who are closer to me, who I have relied on more for counsel or advice," he told the paper. "Should I be successful in this campaign, she will be somebody who has the utmost access to the Obama administration."