Later Saturday, in Illinois, Obama helped fill sandbags near the Mississippi River in an area devastated by flooding, his campaign said. The same day, Sen. John McCain extended his sympathies to those affected by flooding in the Midwest.

According to his campaign, Obama wants to invest $150 billion over the next 10 years to establish a green energy sector; create a national low-carbon fuel standard to ensure that the fuel is more efficient, and invest in clean energies like solar, wind and biodiesel.

That, according to the campaign, would create up to 5 million new green energy jobs.

Obama also blasted McCain, the presumptive GOP presidential candidate, for his recent silence on energy reform and his support for a gas tax holiday.

"He isn't offering any solutions to help Americans pay for high gas prices. Instead, he's proposing a gas tax holiday that's nothing more than a Washington stunt," Obama said. "I was for the idea back then, but I've learned from my mistake, because I don't think it's right to say you're offering families relief when you're just boosting oil company profits."

Obama says McCain's gas tax plan would "actually do real harm" and take "$3 billion a month out of the highway trust fund and hand it over to the oil companies."

During the primaries on Super Tuesday, he received only 35 percent of Latinos' vote, while former rival Sen. Hilary Clinton's received 63 percent.

"There really wasn't an opportunity for Barack Obama to introduce himself to Latino voters.

"He needs to get out there and do that and he needs to listen to Latino voters and understand what they care about," said Arturo Vargas, of the National Association of Latino Elected and Appointed Officials.

WATCH: The debate over immigration

Obama has supported President Bush-backed immigration legislation, which would have increased funding and improved border security technology, improved enforcement of existing laws, and provided a legal path to citizenship for some illegal immigrants.

The Illinois senator also voted to authorize construction of a 700-mile fence along the U.S.-Mexican border.

The Obama campaign said in a statement: "It's not that we will grant citizenship, but we strongly support requiring them to legalize their status and allowing them to earn their right to commit to this country and eventually become citizens." 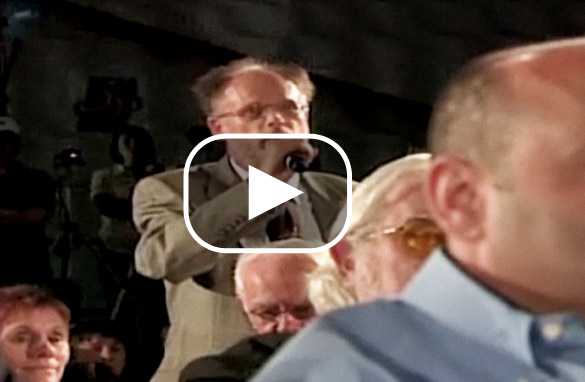