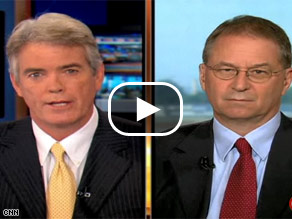 (CNN) - For rogue nations pursuing nuclear weapons, the huge hurdle - and therefore the saving grace of the rest of the world - has been the challenge to build a device that can be mounted atop a missile. Plans that had been peddled by the infamous A.Q. Khan network - while potentially devastating in their destructive power - by and large had been thought to be rather primitive in their construction and unwieldy in their delivery capability.

Now, however, comes word from former UN weapons inspector David Albright that the Khan network had plans for an advanced weapons system that might fit onto the sort of missiles possessed by North Korea and Iran.

Albright told me this morning that the blueprints were "Quite advanced. Basically designs from Pakistan's nuclear arsenal". And, says Albright, the type of designs Pakistan insisted Khan did not take from that nation's nuclear arsenal.

Plans for the weapons systems were allegedly found in the possession of Friedrich, Marco and Urs Tinner, a Swiss father and his two sons believed to be associated with the A.Q. Khan network. Did any of this technology actually make its way to rogue states? Impossible to know, according to Albright. The Tinners, he says "are not co-operating with the prosecutors. Khan is not co-operating. One of the key questions is did Iran buy these designs? Does it in that sense know more about making nuclear weapons than the public realizes?"

The U.S. government and its closest allies have known about these blueprints for a couple of years. Which is, perhaps, why the Administration has been so aggressive in putting the screws to Iran to come clean about its nuclear program, and why Israeli officials have been making overt threats to Iran. The public, through Albright's investigation, is only learning about it now.

And Albright is pursuing the issue with urgency. The Tinners, he fears, could soon be released from a Swiss jail. A.Q. Khan, who has been under house arrest - and who claimed in a CNN interview that he was merely a "fall guy" - may soon be released from house arrest in Islamabad. Khan, he says, needs to be interviewed by the United States. Pakistan has so far refused. The Tinners, he says, need to be prosecuted.

If Iran is pursuing a military nuclear program, as the U.S. and its allies claim, the blueprints for this advanced weapons system could give Iran "a great shortcut to making smaller nuclear weapons" according to Albright. "I think we should be troubled", he says, "troubled on many levels."