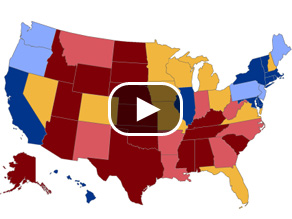 "The Quinnipiac poll in Pennsylvania indicates that Obama may not have a problem carrying states that he lost to Hillary Clinton during the primary season, regardless of the chatter on that topic back in April," said CNN Polling Director Keating Holland.

Holland added that the addition of the traditional fall battleground to the Obama column moves the Illinois Senator from seven electoral votes behind McCain to 17 votes ahead, but that the more important number is 59 - the number of electoral votes Obama still needs to win the White House, assuming every state that is now in his column goes for him in November.

"It will take at least three 'toss-up' states for Obama to reach the 270 needed to become the next president," said Holland.

Be sure to check here to get the full CNN interactive Electoral College map.

The map is based on analysis of several factors, including polling, voting trends, ad spending, candidate visits, and guidance from the campaigns and political strategists.