Cindy McCain not backing down on Michelle Obama comment 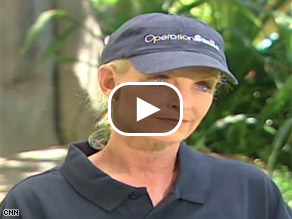 Watch a clip of John King's interview with Cindy McCain.

(CNN) - As the presidential campaigns of John McCain and Barack Obama tangle over which is unfairly dragging the prospective first ladies into the general election battle, Cindy McCain sent a signal this morning that she’s not about to step out of the fray.

The wife of presumptive Republican nominee John McCain stood behind her initial response to Democratic counterpart Michelle Obama’s comment that for the first time she was “really proud” of her country. She told CNN’s John King that her own remark – that she had “always” been proud of her country – had been a spontaneous response, not a planned attack.

“I’m an emotional woman when it comes to service to our country. I’ve watched many people’s children leave and go serve,” she said. “This is something that is the fiber of the McCain family. It was nothing more than me just saying, look, I believe in this country so strongly.”

“I think [Obama is] a fine woman and a good mother” but that both women were just “in an interesting line of work right now.”

She repeated her defense of her initial reaction in an interview that aired on ABC News Thursday. "I don't know why [Obama] said what she said,” said McCain. “All I know is that I have always been proud of my country."

McCain is in Vietnam, where her husband spent more than five years as a prisoner of war, on a humanitarian mission.

Several days ago, first lady Laura Bush defended Obama, telling an interviewer that she believed her original remark by the wife of presumptive Democratic nominee Barack Obama had been misinterpreted as unpatriotic. On Thursday, Obama senior adviser David Axelrod told CNN that Cindy McCain’s response had not cleared up matters from the campaign’s perspective.

“Well, I didn't hear an explanation,” Axelrod told CNN’s John Roberts in an interview on American Morning. “She just said that the McCain family feels strongly about America. And I think the Obama family does as well. I think most Americans do.”