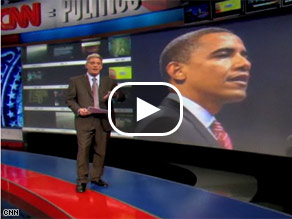 NEW YORK (CNN) - Conservative talk radio host Armstrong Williams has never voted for a Democratic presidential candidate. In fact, he says he has never even thought about the opposition. But this year – as Williams told me on today’s American Morning - things might be different. At the very least, he is thinking about the opposition. A lot. “You cannot help but look at and realize,” he told me, “that if Senator Obama wins, it’ll be the first time that someone would occupy the White House other than white men of America.”

For many Americans, that’s a heady thought – one that could be transformational in so many ways. Yet at the same time, Williams insists, Obama’s race is not a factor in his seesawing political emotions. “There’s no way I could vote for a candidate because of his race”, Williams said, “because it would contradict everything I’ve ever written and said in the past about racial politics. But, I’m open”.

So can we believe that race isn’t a factor in this rock-ribbed Republican’s potential conversion, particularly since Williams says about Obama’s policies “there’s not much I can embrace now”? Let’s consider former Republican Congressman J.C. Watts’ thoughts on the matter. Watts is one of a number of “Obamacons” – conservatives, including many African-Americans, who are giving the Senator a good, hard look. Obamacons believe he may be the best-equipped to take on poverty and urban policy, issues that are as important to them as low taxes and constructionist judges. Williams told me today “It would be foolish of me to say you cannot look at his candidacy and realize there’s something here that not only America but the world is ecstatic about.”

Obamacons believe he may be good for what ails the nation and the world.

As enticing as it might seem, the Obama medicine would be tough for Republicans to swallow. Pundits joke that the Senator’s policies make Ted Kennedy look like a conservative. Could they really set aside his views on taxes and abortion? Could they ignore the type of judges he would appoint to the Supreme Court? At this point, Williams isn’t sure. He hopes Obama might make enough progress on issues like capital gains and partial birth abortion to make him comfortable, but so far, there’s no suggestion of that. But William’s 82 year-old mother is committed. “She’s determined, and she’s voting for him,” he told me. “She never thought she would live to see the day that she would see the progress of America where we could show people that we’ve moved beyond this silly issue of race.” And for Obamacons, that may be the deciding factor.