Sunday Roundup: A battle of the 'flip-flops'

Both sides tried to go on offense, with the Obama camp accusing McCain of "yet another flip-flop," on the issue of oil drilling and the McCain camp saying Obama broke his word on the issue of campaign financing.

McCain said he now supports lifting a federal ban on off-shore drilling that he once supported.

Daschle pointed to the issue, saying, "we're surprised at yet another flip-flop on the part of John McCain here."

But McCain's economic adviser Carly Fiorina, on CBS' "Face the Nation," argued that "a good leader is influenced by the facts on the ground."

She added, "We've never before faced a situation where the price of a barrel of oil has doubled in the last 12 months. So what John McCain has said is that we now need to take control of our own energy future." Watch more on the off-shore drilling debate »

When McCain announced his decision Tuesday, he said off-shore oil drilling could be part of a plan "in the short term in resolving our energy crisis." But many analysts argue any significant oil production gain would be years away.

On the issue of campaign financing, Obama announced Thursday he would not take public financing for the general election.

Obama, the presumptive Democratic nominee, had long spoken in support of public financing, and when asked on a questionnaire whether he would accept public financing if the competition did, he answered "yes."

Tom Ridge not ruling out a VP run

"If he asks me, we'll have a private conversation and we'll decide whether or not we ought to tell you what we said," Ridge said.

Host Chris Wallace pressed Ridge on his pro-abortion rights views - something critics say could hurt his chances of running with McCain, who has anti-abortion positions.

So would Ridge's views conflict with his support for a McCain administration? Apparently not.

"Obviously, the vice president's job is to support once a decision is made, whether it's on social issues, economic issues or diplomatic issues, the position of the president of the United States," he said.

"But that doesn't mean that you don't share a belief that you've had your entire life. But again, those are really difficult and challenging questions when the vice president and the president disagree on a wide range of issues, but the vice president's job is to support the administration."

Ridge, the former governor of Pennslyvania, could help McCain in the state, which is in play this year. As a moderately conservative Catholic, he could aid in other states with independent voters.

But his position in favor of abortion rights could hurt McCain among the more conservative GOP base.

END_OF_DOCUMENT_TOKEN_TO_BE_REPLACED

Pawlenty: VP "not something I have designs on"

(CNN) - Sen. John McCain supporter Gov. Tim Pawlenty, R-Minnesota, remained mum on Sunday about the possibility of running alongside the Arizona senator in the general election.

"We talked about family and sports and politics and the like, but we did not discuss any talk about the vice presidential pick," the governor told CNN's Wolf Blitzer when asked about his recent meeting with the presumptive Republican nominee.

Many analysts have identified Pawlenty as a likely V.P. candidate. He is the national co-chairman for the McCain campaign and has been an active supporter of the Arizona senator's presidential pursuit.

Minnesota, which hosts the Republican National Convention in September, is also widely considered to be a battleground state for both parties this November-adding to his appeal as a potential running mate.

Despite staunchly defending McCain on issues ranging from taxes to oil drilling to alternative energy solutions, Pawlenty refused to take the bait on the "veep" question.

"I am very happy being the governor of the state of Minnesota. [being vice president] is not something I have designs on," Pawlenty stated.

Richardson: 'You can't drill your way out of the problem'

“The point is that we have got to have a bipartisan comprehensive strategy and this administration, it seems Senator McCain, all they want to do is drill, drill, drill,” the former Democratic candidate told CNN’s Wolf Blitzer. “You can't drill your way out of the problem.”

Democrats have criticized the presumptive Republican nominee for his apparent “flip-flop” on the issue of offshore drilling. The McCain camp denies that he’s changed his position, arguing that he has always supported a state’s right to choose what happens in its coastal waters. Aides said recently that the senator voted to uphold the federal ban on ocean drilling in 2000 as a way of supporting states’ rights.

Throughout his appearance on Late Edition, Richardson frequently linked McCain’s proposal to the plan put forth by President Bush.

“The Bush administration has waited eight years to pressure OPEC and their great friends, the Saudis. When President Bush came in, he said he was going to jawbone OPEC to increase production,” the governor stated. “What is needed is not what the president and John McCain want to do, which is drill offshore. What is needed is a comprehensive strategy of fuel efficiency, 50 miles-per-gallon vehicles… mass transit. What is needed is investments in renewable energy and solar and wind,” he said.

Richardson is the latest in a string of Democrats to slam McCain’s solution for lowering gas prices. On Wednesday, Senate Majority Leader Harry Reid, D-Nevada called it a “cynical campaign ploy” and House Majority Leader Steny Hoyer, D-Maryland, said: “It is so hard to tell what Sen. McCain’s positions are because they change so rapidly… [This] is certainly not the position he had just six months ago.”

Obama's campaign says Sen. John McCain has contradictions of his own, namely on illegal immigration.

According to The Associated Press, several people who were at the meeting said McCain assured them that he would push for comprehensive immigration reform if he's elected president.

At a Republican debate at the Reagan Library in January, McCain was asked whether he would still vote for his original measure.

"No, I would not ... because we know what the situation is today ... that people want the borders secured first," he said.

"The original proposal, I opposed. Sen. McCain's new proposal, I support, which is to ensure you have border security before you have any other type of reform," L.A. County Supervisor Mike Antonovich said.

After the Chicago meeting, the Obama campaign's communications director, Robert Gibbs, charged that McCain was trying to have it both ways. 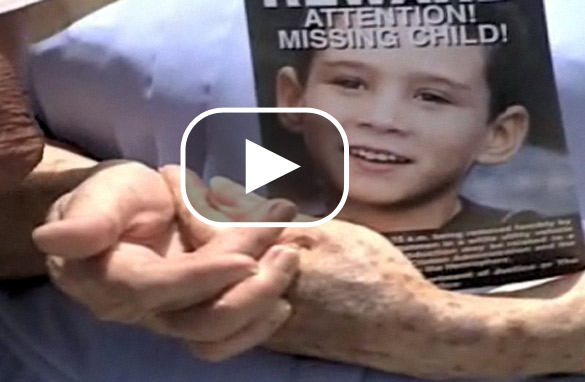