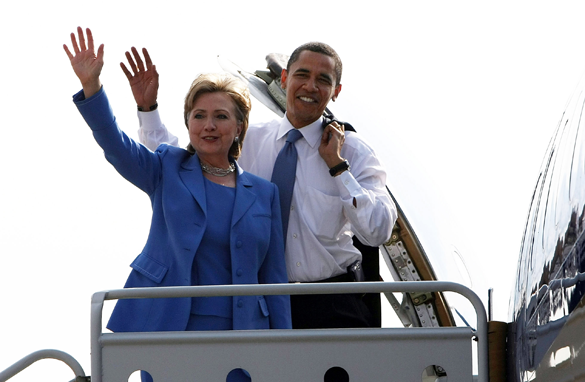 This is only a CNN estimate and is likely to change many more times in the lead up to the election.

The Quinnipiac surveys, released Thursday, showed Obama with a 17-point lead in Minnesota, 54-37 percent, and a 13 point lead in Wisconsin, 52-39 percent.

It also seeks to draw parallels between achieving energy independence and some of America’s past monumental accomplishments.

“John McCain will call America to our next national purpose: Energy Security,” the announcer says.

The ad is set to air in key battleground states of: Nevada, New Hampshire, Colorado, Missouri, New Mexico, Michigan, Minnesota, Wisconnsin, Pennsylvania, Ohio, Iowa and on national cable. The campaign would not release the specific size of the buy, but did say it was "large."

“Well, you know, I’m happy to be home,” he told CNN after McCain’s town hall meeting in Cincinnati yesterday. “I commuted between Washington and Ohio where we are now for 15 years, and about nine months, so I made the decision to come home and it’s been great. I’ve got three teenagers, so I’m not looking for a way back to Washington right now."

Watch: Portman explain why he would say no to being VP

Portman, who also served as United States Trade Representative and White House budget director, said he is open to helping McCain in other ways.

“I love public service,” he said. “I want to help him. I think he’s the right person to lead the country at this critical time, but I’m not interested in going back to D.C. right now.”

At a fundraiser in the Cincinnati suburbs Thursday night, McCain praised Portman, who was in attendance, as “one of the outstanding public servants in the next generation of leadership of our Republican party and our nation.”

CNNMoney: What Obama means by tax the wealthy

But what does the Democratic candidate mean by high-income? Who'd be affected and how? While the Obama campaign must still settle on more details about their plans, outlines are starting to emerge.

Indeed, under Obama's tax plan, married couples with at least $250,000 in gross income are likely to see their taxes go up if Obama is elected president.

But what about single filers? The line for them would likely be about $200,000, according to an Obama adviser.

Those groups could end up paying anywhere from several thousand dollars to tens of thousands of dollars more to Uncle Sam than they do now, according to estimates from the Tax Policy Center.

[cnn-photo-caption image= http://i2.cdn.turner.com/cnn/2008/POLITICS/06/26/clinton.obama/art.unity.gi.jpg caption="Sen. Obama and Michelle Obama donated to Clinton's debt."]
(CNN) - Sen. Barack Obama and his wife, Michelle, each donated $2,300 Thursday to the campaign of his former opponent, Sen. Hillary Clinton, which is millions of dollars in debt.

"[Obama] wrote a check himself, as well as his finance chairman, so I got two checks in my pocket for Hillary," said Clinton adviser Terry McAuliffe.

Asked how much the checks were for, he responded, "They maxed out."

CNN: Obama donates to Clinton campaign
Sen. Barack Obama and his wife, Michelle, each donated $2,300 Thursday to the campaign of his former opponent, Sen. Hillary Clinton, which is millions of dollars in debt. In addition, Obama's national finance chairman, Penny Pritzker, and her husband donated another $2,300 each, said Obama communications director Robert Gibbs.

NY Times: An Inexhaustible Energy Source: Heated Words. But Can It Be Tapped?
Fourth of July fireworks came early on Capitol Hill. With angry constituents waiting for them back home, lawmakers clashed fiercely on Thursday over how to address high gasoline and oil prices. But with all sides recognizing that there is virtually nothing Congress can do to lower fuel prices any time soon, Democrats and Republicans focused as much on finger-pointing as on policy making.

Boston Globe: Recent rulings spotlight election's supreme stakes
A series of highly anticipated Supreme Court rulings in recent days and weeks has injected the high court into the presidential campaign, underscoring the likelihood that the next president will almost certainly get the opportunity to dramatically shift – or solidify – the judicial balance of power for decades to come.
END_OF_DOCUMENT_TOKEN_TO_BE_REPLACED

* Sen. Barack Obama is joined by Sen. Hillary Clinton at a “Unite for Change” rally in Unity, NH.