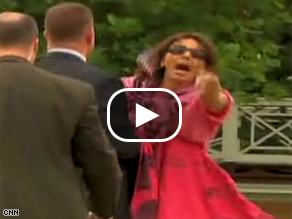 (CNN) - It's The Fourth of July, but not everyone was in a festive mood when President Bush delivered a speech Thursday at Thomas Jefferson's famous home, Monticello.

The President, who was talking part in Monticello's annual naturalization ceremony, was interrupted several times by protesters.

"War criminal!" one protester repeatedly yelled as she was escorted out by Secret Service members.

"He has brought fascism to this shore," another man yelled.

The president did not appear to acknowledge the protesters.