McCain: Spending is out of control 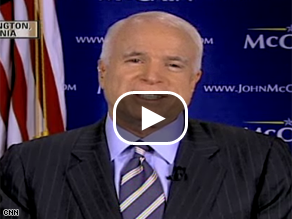 (CNN) - Sen. John McCain on Tuesday brushed off skepticism from economists over his plan to balance the budget by 2013 by keeping taxes low and restraining spending.

"We're going to reach restrained spending, we're going to have the economy grow again and increase revenues. The problem is that spending got completely out of control," McCain said on CNN's American Morning.

McCain is in favor of extending President Bush’s tax cuts, which are set to expire in 2010. The Center on Budget and Policy Priorities has projected that by extending those tax cuts, which McCain originally opposed, and adding in the additional cuts the presumptive Republican nominee has proposed, the deficit for 2013 would be somewhere around $439 billion to $445 billion.