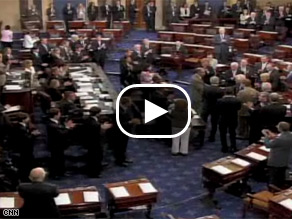 A vote just over a week ago fell one vote shy of the 60 needed to end the filibuster. Wednesday's effort to break the filibuster succeeded, 69-30. Sen. John McCain, the Republican presidential candidate, did not vote.

Kennedy, a 76-year-old Massachusetts Democrat, had surgery to remove the tumor June 2 and is now undergoing chemotherapy and radiation treatment.

Kennedy is chairman of the Health, Education, Labor and Pensions Committee and is an influential Democrat on health-care issues.

President Bush earlier threatened to veto the legislation - so even though the Democrats beat the filibuster, they may need to corral votes afresh to override a veto.

But a spokesman for Harry Reid said it would be "politically impossible" for Republicans who switched their vote after Kennedy's dramatic appearance to change sides again and support a veto.