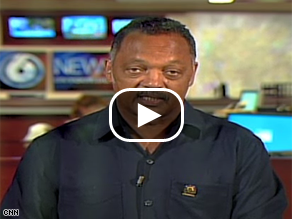 (CNN) - The Rev. Jesse Jackson on Thursday denied allegations that his disparaging remarks about Sen. Barack Obama stemmed from envy.

"That's kind of ridiculous. He's running the last lap of a 54-year marathon. He is running that race. I am a part of that race," Jackson said on CNN's "American Morning," referring to the modern civil rights struggle. Jackson ran for president on the Democratic ticket in 1984 and 1988.

On Wednesday, he apologized for the "crude and hurtful remarks" he made about Obama following an interview Sunday with a Fox News correspondent.