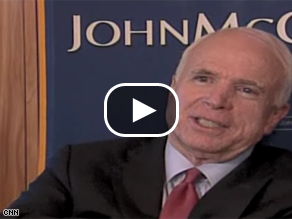 Watch McCain field a question about Viagra and health insurance.

(CNN) - John McCain is known for his frequent chats with reporters and his willingness to discuss nearly any issue.

But at least one is off-limits, the Republican presidential nominee suggested Wednesday: Viagra.

"I certainly do not want to discuss that issue," the Arizona senator said aboard his "Straight Talk Express" bus in Ohio when asked about his views on health insurance covering the medication.

But the off-message topic was raised from a member of McCain’s own team: national co-chairwoman Carly Fiorina, who had said earlier women often express frustration over the fact many health insurance plans cover Viagra but not birth control medication.

"Let me give you a real, live example, which I've been hearing a lot about from women. There are many health insurance plans that will cover Viagra but won't cover birth control medication. Those women would like a choice," she said Monday.

A McCain spokesman later said the Arizona senator supported competition in the healthcare industry, presumably allowing women to nix policies that cover Viagra but not their specific needs.

The exchange also followed a town-hall event during which McCain touched upon the abortion issue, a matter that traditionally hasn’t animated him on the stump.

After praising President Bush’s efforts to expand faith-based programs, McCain pivoted: “I also think that we should do everything that we can, and one of those in my view is respect for human life both born and the unborn.”

The comments led to a standing ovation - his first at that event.