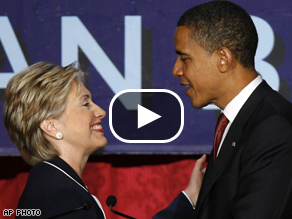 NEW YORK (CNN) - For just the second time since she ended her campaign in early June, Hillary Clinton made a public appearance with Barack Obama Thursday morning at a women’s breakfast fundraiser in New York.

Obama is focusing on women’s issues Thursday, specifically how his proposed economic plan would impact them. But the message of unity between the two former Democratic rivals going forward into the general election was front and center.

“Anyone who voted for me has so much in common with those who voted for Barack,” Clinton told donors while introducing him. “It is critical that we join forces because the Democratic Party is a family.”

“Sometimes a dysfunctional family,” Clinton added, “but it’s a family.”

“1 am very proud to be here with someone I serve with from the United States Senate who I campaigned hard with and against,” she said. “[Someone] who I’m going to do everything I can and everything I’m asked to make sure he takes the oath of office on January 20th, 2009.”

Obama heaped praise on Clinton, saying, “I know firsthand how tough she is, how passionate she is, how committed she is to the causes that bring us here today.” He noted that though they took the same historic journey, “I didn’t do it in heels.”

The Illinois senator told the more than 2,000 donors gathered that he learned from Clinton as candidate and that he’ll “desperately need” both the New York senator and her husband, former President Clinton, over the course of the campaign.

Thursday morning’s fundraiser was the third Obama has held with Clinton. Spokespeople for both Clinton and Obama say there will be future events together, though none are currently scheduled.