Roberts: What was Jesse Jackson thinking? 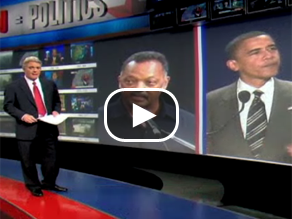 (CNN) - Rev. Jesse Jackson has been known to utter some intemperate language in the past. Remember his famous 1984 description of New York City as “Hymietown”? It was deeply offensive to many people and Jackson was eventually forced to publicly apologize, though it took a month. It took far less time for Jackson to apologize for wanting to cut off a certain sensitive part of Barack Obama’s anatomy.

His comments were stunning to say the least and prompted many people to wonder – despite his proclaimed support for Obama – what he really thinks about the Senator, and Jackson moved quickly to apologize. "For any harm or hurt that this hot mic private conversation may have caused, I apologize," he said in a statement released Wednesday afternoon. "My support for Senator Obama's campaign is wide, deep and unequivocal..."

Some believe Jackson, who ran for president in 1984 and 1988, is deeply envious of Obama for succeeding where he failed. I asked Jackson about that on today’s American Morning program. “That’s ridiculous,” Jackson assured me. “He’s running the last lap of a 54-year marathon. He is running that race. I am part of that race.” He added that whether it is “in 1963 Dr. King speaking about the dream or Barack in Denver, it’s a moment I really cherish...”

If Jackson so cherishes the moment, how is it that he wants to leave the Senator with – as Austin Powers might say – “a twig and no berries”? In his ‘open-mike’ moment, Jackson said he thought Obama was “talking down” to African Americans with his faith-based initiatives. This morning, when I confronted him directly, he refused to repeat that charge — in fact, he denied it completely. He also offered a convoluted explanation of why he thought faith-based programs can’t solve all the problems of the inner city.

Why did a media-savvy pro like Jackson describe his remarks as part of a “private conversation”? What was it about the microphone on his lapel, the camera and the appearance on nationwide television that led him to believe anything he would say at that moment was private? In his defense, there are still plenty of media veterans who every year get caught uttering one of the seven words you can’t say on television - but he ought to know that you can’t say what he did in a television studio without it completely blowing up in his face.

The Obama campaign is rightfully incensed over what Jackson said, though the Senator has accepted his apology. So is Jackson’s own family - after all, Rep. Jesse Jackson Jr. is co-chairman of Obama’s campaign. "I thoroughly reject and repudiate his ugly rhetoric,” said Congressman Jackson in a statement released Wednesday. “He should keep hope alive and any personal attacks and insults to himself."

So – just how much trouble is Jesse Sr. in with his family?

“He is my congressman and I am his father,” the elder Jackson told me this morning. “And ultimately, we get along.”