The sources said the official Congressional delegation trip, known as a CODEL, will occur around the time Obama heads overseas for a previously-announced campaign trip to France, Germany, Great Britain, Israel, and Jordan to help beef up his foreign policy credentials. Officials are keeping the precise dates of Obama's trip under wraps, however, for obvious security reasons.

The inclusion of Hagel on the official portion of the trip is guaranteed to further fuel speculation that Obama might pick a Republican as a running mate on a presidential ticket aimed at winning over independents. Hagel, who privately discusses foreign policy matters with both Obama and Republican presumptive presidential nominee John McCain, has publicly left the door open to a possible bipartisan ticket.

Aides to Hagel and Reed both refused to comment when asked by CNN about the upcoming trip.

END_OF_DOCUMENT_TOKEN_TO_BE_REPLACED

Plus: Will Obama be allowed to speak at a historic landmark in Berlin? German Chancellor Angela Merkel is skeptical about the Illinois senator’s request to campaign at the Brandenburg Gate. CNN’s White House Correspondent Ed Henry has the story.

Polls: Obama ahead by eight

[cnn-photo-caption image= http://i2.cdn.turner.com/cnn/2008/images/07/11/art.mccainobama.ap.jpg caption="Obama is up over McCain in the latest CNN poll of polls."](CNN) - As the dog days of summer set in and Americans take a break from the daily political band-and-forth, a new CNN analysis of several recent national opinion surveys show Barack Obama with a sizeable lead over John McCain.

In the latest CNN Poll of polls, the Illinois senator holds an 8-point lead among registered voters nationwide, 49 percent to 41 percent, with 10 percent still undecided.

The 8-point spread is up 2 points from a CNN poll of polls released one week ago. It is double the margin it was one month ago, days after the prolonged Democratic race ended.

“Obama's lead has grown a bit over the course of the past month. It is still relatively slim, but it is certainly solid," CNN Senior Political Researcher Alan Silverleib said. "The burden is on McCain to find a way to shake things up as we enter the traditional summer doldrums.”

The poll of polls consists of three recent surveys from Gallup, CNN/Opinion Research Corp. and LA Times/Bloomberg. It does not carry a margin of error.

The spot features a man and a woman discussing McCain’s assertion –- also described in an RNC radio ad running in those markets - that Obama would raise taxes on people making $32,000 a year.

“This is shameful,” the man says. “It’s just making stuff up.”

The ad says that Obama would only raise taxes on those making over $250,000, and cites FactCheck.org as describing McCain’s charges as “not true.”

“Sounds like George Bush all over again,” the woman says.

“Guess that’s why they say John McCain, McSame as Bush,” the man says, concluding the ad.

"If he was captured alive, then we would make a decision to bring the full weight of not only U.S. justice, but world justice down on him," Obama said during the interview, the entirety of which is set to air Sunday at 1 p.m. ET.

"I am not a cheerleader for the death penalty - I think it has to be reserved for only the most heinous crimes," Obama also said. "But I certainly think plotting and engineering the death of 3,000 Americans justifies such an approach."

In the wide-ranging interview, the Illinois senator also criticized Afghanistan President Hamid Karzai for failing to bring order to his country.

"I think the Karzai government has not gotten out of the bunker, and helped to organize Afghanistan - the government, the judiciary, police forces - in ways that would give people confidence," he said. "So there are a lot of problems there. But a big chunk of the issue is that we allowed the Taliban and al Qaeda to regenerate itself when we had them on the ropes. That was a big mistake, and it's one I'm going to correct when I'm president."

“Barack Obama had no interest in Afghanistan until he started running for president. Obama has never visited Afghanistan to meet our allies on the ground, yet he is audacious enough to assert that President Karzai has ‘not gotten out of the bunker,'" he said in a statement. "Obama’s words are naively out-of-touch with reality and offensive to America’s allies. Considering Obama’s negligent leadership of the Senate subcommittee charged with overseeing the NATO mission in Afghanistan, Obama has no credibility discussing Afghanistan."

Analysis: NASCAR and politics, novel but not new

[cnn-photo-caption image= http://i2.cdn.turner.com/cnn/2008/images/07/11/art.preston.cnn.jpg caption=" CNN's Mark Preston at the Indianapolis Motor Speedway. Obama and McCain are vying for the support of the tens of millions of race car enthusiasts – fans that would fill the stands of venues such as the hallowed grounds at Indy. Credit: CNN’s Alec Miran."]WASHINGTON (CNN) – The political and sporting worlds collided Friday afternoon when CNN's sister publication, Sports Illustrated, reported that Barack Obama is considering sponsoring a car in a NASCAR race next month.

Oh, but not any NASCAR event. Obama's name could whiz by at speeds of 150 to 200 mph before 100,000 or more fans at Pocono Raceway in the electoral rich state of Pennsylvania (21 votes). You might remember that Obama lost Pennsylvania to Hillary Clinton in the Democratic primary, a defeat that was seen as another example of his problem with attracting support from so-called blue-collar, white voters.

Obama has vowed to run a 50-state campaign with a specific emphasis on states such as Georgia, North Carolina, and Indiana. It is fair to say that these three states have a healthy share of white, blue-collar NASCAR and Indy Racing fans.

END_OF_DOCUMENT_TOKEN_TO_BE_REPLACED

On Friday, Obama took a daytrip from Chicago to Dayton to detail his energy plan and to emphasize how the lack of a sound one is a national security risk. The focus was on ending dependence on foreign oil through investment in alternative energy but Obama laced his various initiatives with repeated jabs at McCain who has taken to calling Obama “Dr. No” because of his consistent rejections of the Arizona senator’s proposals.

Obama started going after McCain on Friday by quoting the Arizona senator saying the country’s dependence on foreign oil stems from 30 years of inaction in Washington.

“I could not agree more, John McCain is exactly right,” Obama said to more than a thousand supporters in a school gymnasium. “The only problem is that out of those 30 years, Senator McCain was one of those politicians in Washington for 26.”

END_OF_DOCUMENT_TOKEN_TO_BE_REPLACED 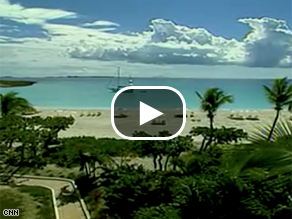 Watch how Obama is a hit in the Caribbean.

We’ve all seen and heard the Obama-inspired You Tube music videos - “Yes We Can” and “I Got A Crush On Obama” - that became instant Internet hits on You Tube. But now Obama is pulling in even more support, some say from an unlikely audience…Caribbean crooners.

Artists from Jamaica and Trinidad are spitting out new tunes and making a splash across the Caribbean with their political statements endorsing the Democratic presidential nominee. Jamaican musician, Cocoa Tea, sings about “Painting the Whitehouse Black” in his song “Barack Obama,” with lyrics like "Keep your eyes on the prize. Obama! Cause now enough of them a realize. The black man is in their eyes."

Cocoa Tea, who is about to begin a reggae for Obama world tour told CNN, "People really are crying out. They need to see a change in Washington...whatever happens in Washington have an impact on the whole wide world."

Other artists, like Mighty Sparrow, are also using their songs to sound off about the U.S. election. Sparrow sings about the war, congressional scandals, and Obama’s vision in his song, “Barack the Magnificent.”
Political observers say these songs aren’t just entertainment, they shape the views of communities with their pulse on U.S. affairs.

Politico.com reporter Daniel Reilly says don’t, "underestimate the importance of these songs as social commentary throughout these islands. Not only are they on the radio but people are discussing them, there are newspaper editorials about them”.

Reilly says this shows Obama is on the minds of many.

With songs like these generating heavy traffic on You Tube, Reilly says this type of political expression can only help generate interest and excitement among a new generation of voters.

“Senator Obama will raise your taxes,” he said at a town hall focused on women voters. “I won't, because jobs are the most important thing our economy creates, and when you raise taxes in a bad economy you eliminate jobs.”

END_OF_DOCUMENT_TOKEN_TO_BE_REPLACED

Jesse Jackson got away with calling New York "Hymietown" a few years ago, a reference to New York's Jewish population. But this time he might not be so fortunate.

Jackson saying he wanted to castrate Barack Obama for "talking down to black people" may mark the end of Jesse Jackson's relevance to anything. His comments – which were caught on an open microphone in a television studio – were in response to Obama's speeches about the responsibilities of absent black fathers.

Jackson apologized, saying he meant there are other important issues to address in the black community – like unemployment and the number of blacks in prison.