Ventura to announce if he's running for Senate on Larry King

Former Minnesota Governor and professional wrestler Jesse Ventura is expected to announce Monday night on CNN’s Larry King Live whether he’ll run for his state’s U.S. Senate seat. Ventura’s deadline to file to run for the senate is Tuesday.

If Ventura jumps into the race and runs as an Independent, the battle for Republican incumbent Norm Coleman’s seat would become a three ring circus. Democrat Al Franken, a former comedian and liberal talk show host, has already filed.

Coleman was first elected in 2002 and is running for his second term. The Democrats are targeting Coleman and hope to win back the seat that was once held by Democrat Paul Wellstone, who was killed in a plane crash while running for re-election in 2002.

Ventura ran for governor of Minnesota as an Independent in 1998, winning a three way race. Coleman was the Republican candidate in that race, losing to Ventura by about 50,000 votes. After what many people in Minnesota describe as a difficult four years in office, Ventura decided not to run for re-election.

He has hinted lately that he might jump into the Senate race. If he does enter the campaign, the question is whether he can win, and if not, which other candidate does he harm more? 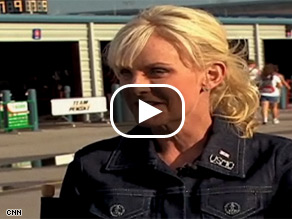 (CNN)–Cindy McCain, a lifelong racing fan, spent her Saturday taking a spin around the track at the Indy Car race in Nashville, Tennessee. In a CNN exclusive, CNN's Brianna Keilar sits down with the wife of presumptive Republican nominee, Sen. John McCain, to discuss their mutual love of car racing and the side of the potential first lady that most voters haven't seen yet.

[cnn-photo-caption image= http://i2.cdn.turner.com/cnn/2008/images/07/14/art.schwarzenegger.may.29.jpg caption="Gov. Schwarzenegger said he would consider a cabinet position if Obama offered one."]
(CNN)—California Governor Arnold Schwarzenegger, who endorsed John McCain’s presidential run before his state’s February primary, said Sunday he would consider accepting an energy-related cabinet position from Democrat Barack Obama if the offer were extended.

“I’m always ready to help in anyway I can,” the California Republican told ABC’s George Stephanopoulos, describing himself as a committed public servant. “I’d take his call now, and I’d take his call when he’s president anytime.”

The former box office star-turned-politician said he is through with his days acting and body building, and plans to travel the world promoting energy independence after leaving the governor’s mansion, whether or not he joins the next administration.

California, a predominantly Democratic state, is thought by some analysts to be somewhat of a long-shot for McCain in November. But Schwarzenegger encouraged the presumptive Republican nominee to continue to campaigning, telling ABC that one in five California voters are swing or independent voters.

Schwarzenegger also defended Obama from recent accusations that he is shifting his positions since effectively claiming the Democratic nomination. “Flip-flopping is getting a bad rap,” said the California governor, adding that he expects both presumptive nominees to move toward the center now that the primaries have ended.

“As long as he’s honest or she’s honest, I think that [changing your mind] is a wonderful thing,” said Schwarzenegger. “I’ve changed my mind on things and it is nothing wrong with it, but I just say to the people I once thought this way now I think this way. End of story.”

[cnn-photo-caption image= http://i2.cdn.turner.com/cnn/2008/images/07/14/art.obama.ap.jpg
caption="Obama repeated his pledge that 'on my first day in office, I would give the military a new mission: ending this war.' "]

The presumptive Democratic presidential nominee's column, titled "My Plan for Iraq," repeated his pledge that "on my first day in office, I would give the military a new mission: ending this war."

Obama wrote that U.S. troops would be redeployed from Iraq to "focus on the broader security challenges that we face" and that "unlike Senator McCain, I would make it absolutely clear that we seek no presence in Iraq similar to our permanent bases in South Korea."

Ending the Iraq war is necessary so that the United States can focus on Afghanistan and Pakistan, "where the Taliban is resurgent and Al Qaeda has a safe haven," he wrote.

"Iraq is not the central front in the war on terrorism, and it never has been," he wrote.

"As Adm. Mike Mullen, the chairman of the Joint Chiefs of Staff, recently pointed out, we won't have sufficient resources to finish the job in Afghanistan until we reduce our commitment to Iraq," Obama wrote.

Al-Maliki, in a speech a week ago, said there should be a timetable to withdraw U.S. troops from Iraq in any agreement on future ties between Iraq and the United States.

Your chance to quiz Nancy Pelosi

[cnn-photo-caption image= http://i.cdn.turner.com/cnn/2008/images/05/29/art.pelosi.gi.jpg caption="So you have a question for Nancy Pelosi?'"]
(CNN)–House Speaker Nancy Pelosi is scheduled to be in "The Situation Room" next Thursday, July 17. Send us your videos and your questions for the California Democrat and it could be asked on CNN.

Obama is expected to visit Israel, but officials could not yet confirm what his plans are there. Erakat was in Paris, France, where Abbas had been attending a summit.

The Obama campaign had no comment on the report.

Abbas held talks Sunday with French President Nicolas Sarkozy ahead of a sweeping summit launching the Union for the Mediterranean, bringing together leaders of more than 40 nations in Europe, the Middle East and Africa.

CNN: Obama embraces Iraq’s timetable call
Sen. Barack Obama, in an op-ed piece in Monday’s New York Times, embraced Iraqi Prime Minister Nuri al-Maliki’s recent call for a timetable for American troops to leave Iraq as “an enormous opportunity.” The presumptive Democratic presidential nominee’s column — titled “My Plan for Iraq” — repeated his pledge that “on my first day in office, I would give the military a new mission: ending this war.”

NY Times Op-Ed: Barack Obama: My Plan for Iraq
THE call by Prime Minister Nuri Kamal al-Maliki for a timetable for the removal of American troops from Iraq presents an enormous opportunity. We should seize this moment to begin the phased redeployment of combat troops that I have long advocated, and that is needed for long-term success in Iraq and the security interests of the United States.

CNN: Ventura to announce if he's running for Senate on Larry King
Will he or won’t he? Former Minnesota Governor and professional wrestler Jesse Ventura is expected to announce Monday night on CNN’s Larry King Live whether he’ll run for his state’s U.S. Senate seat. Ventura’s deadline to file to run for the senate is Tuesday.

CNNMoney.com: U.S. plan to save Fannie and Freddie
Paulson and Bernanke proposal would give mortgage finance giants bigger line of credit with Treasury and open NY Federal Reserve lending window.

Washington Times: Candidates' tax plans agree on one thing: More debt
The differences between the tax policies being promoted by Sens. Barack Obama and John McCain are stark, but neither candidate's proposal tackles the nation's worsening fiscal problems, analysts say.