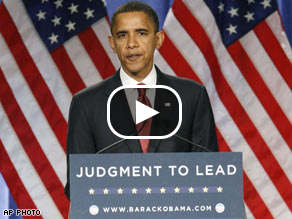 (CNN) - Sen. Barack Obama on Tuesday called the war in Iraq a "dangerous distraction," and said more emphasis must be placed on the battle in Afghanistan.

"As should have been apparent to President Bush and Sen. [John] McCain - the central front in the war on terror is not Iraq, and it never was," Obama said in what his campaign called a major policy address on Iraq, Afghanistan and national security.

Watch: Obama: We will lead again

Obama said part of his new strategy will be "taking the fight to al Qaeda in Afghanistan and Pakistan."