In the latest installment of CNN=Politics Daily, Dana Bash takes a look at McCain's outreach to African-American voters and Senior Political Correspondent Candy Crowley breaks down a new poll on the role that race may be playing in the presidential election.

Is former presidential candidate Mitt Romney vying for McCain’s VP spot? Tom Foreman takes a look at why Romney may be a good choice for the GOP ticket.

Sen. Barack Obama has been talking about national security a lot lately. Senior Political Analyst Bill Schneider sheds some light on why the presumptive Democratic nominee is focussing on the topic and looks ahead at Obama's planned trip abroad.

[cnn-photo-caption image= http://i2.cdn.turner.com/cnn/2008/images/07/16/art.va.gi.jpg caption="Obama is making a run at several states Bush won in 2004."]WASHINGTON (CNN) – Critics sneered when Barack Obama vowed to challenge John McCain in states that traditionally have been Republican strongholds. But a review of early television advertising spending shows that the presumptive Democratic presidential nominee is making robust buys in a handful of “red states.”

So far, Obama has spent $60,000 in Alaska; $3.5 million in Florida; $1.3 million in Georgia; $1 million in Indiana; $100,000 in Montana; $1 million in North Carolina; and $1.8 million in Virginia, according to a new analysis by TNS/Campaign Media Analysis Group, CNN’s political television advertising consultant.

“Obama’s targeting of these red states is unprecedented,” said Evan Tracey, chief operating officer of CMAG. “He is clearly looking to expand the playing field.”

In all, McCain has outspent Obama - $23 million to $19 million – on political television advertising when you look at these figures through the lens of the general election. To be fair, McCain has had a head start – CMAG’s point of reference for McCain’s general election buys is mid-May and the Republican National Committee accounts for $3 million of the McCain total.

END_OF_DOCUMENT_TOKEN_TO_BE_REPLACED

Czechoslovakia gets star treatment for third day in a row

[cnn-photo-caption image= http://i2.cdn.turner.com/cnn/2008/images/07/16/art.nunn.ap.jpg caption="Nunn brought Czechoslovakia back to center stage."] (CNN) - A lot of countries haven’t gotten a share of the spotlight at any of this week’s foreign policy-themed presidential campaign events, or shown up in any of the new national security-focused ads: most of the United States’ hemispheric neighbors, for instance, or just about any nation on the African continent.

Rating no fewer than three references in three days: the non-existent state of Czechoslovakia.

That country – which ceased to exist in 1993, when it split into two nations, the Czech Republic and Slovakia – has now been referred to as a present-day area of concern by two of the most respected current and former Senate foreign policy experts in the space of less than a week. On Monday and Tuesday, it was presumptive Republican nominee John McCain, who said he was worried about recent Russian moves to reduce energy supplies to “Czechoslovakia.”

On Wednesday it was the Democrats’ turn, as Republicans quickly circulated a clip of former Georgia senator and current VP prospect Sam Nunn making the same slip at a mid-day national security summit, flanked by his party’s presumptive nominee Barack Obama.

“…We in this country are about to, under this government, under the Bush administration, deploy [a] missile defense system in Poland and Czechoslovakia,” Nunn said at the Indiana event Wednesday.

So far this week, Persia, Yugoslavia and Siam have yet to come up for discussion.

The 30-second spot aimed at women voters shows McCain's apparent unease when a reporter asked him last week whether it was unfair that some insurance plans covered Viagra and not birth control.

"Ever use birth control? Than you'll want to hear this," the ad's narrator states before a flustered McCain is shown saying, "I don't know enough about it to give you an informed answer."

Planned Parenthood spokesman Tait Sye says the ad will run in Colorado, Iowa, Minnesota, New Mexico, Ohio, Wisconsin, and Washington, D.C. during television programs popular with women - including Wednesday's season premier of "Project Runway" and "Army Wives" on Lifetime. It will also air during Oprah in some markets.

The group is hoping this issue in particular resonates with the broad swath of the women voters McCain is trying to court - according to one study Planned Parenthood cites 98 percent of sexually active women have used at least one form of birth control.

The off-message moment stemmed from a comment by a member of McCain’s own team: national co-chairwoman Carly Fiorina, who had said earlier women often express frustration over the fact many health insurance plans cover Viagra but not birth control medication.

A McCain spokesman later said the Arizona senator supported competition in the healthcare industry, presumably allowing women to nix policies that cover Viagra but not their specific needs. 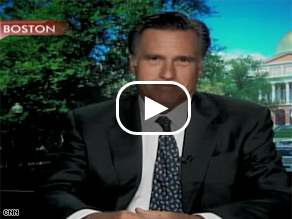 “With regards to all the people that think I might be on some kind of shortlist, the only one that really counts in my regard is John McCain,” Romney told CNN’s Wolf Blitzer. “I don’t think he’s told anybody what his thinking is.”

The former Massachusetts governor continued to downplay his chances of joining the GOP ticket. “I don’t want to engage in any speculation with regards to the VP sweepstakes,” he said. “I expect to support the administration and the McCain team. I don’t expect to be part of it.”

In recent months, Romney has been a constant presence on the airwaves as a surrogate for John McCain’s campaign, often serving as a tough critic of presumptive Democratic nominee Barack Obama.

END_OF_DOCUMENT_TOKEN_TO_BE_REPLACED

Cafferty: Obama in danger of taking himself too seriously?

One of the jobs of American presidents, whether they realize it or not, is to make us laugh.

You need look no farther than George W. Bush. But if you want to look farther, there's a gold mine of yucks. Whether it's Bill Clinton with his blue dresses and cigars, Al Gore with his robotic seriousness, Ronald Reagan sleeping through cabinet meetings, or Dan Quayle trying to spell potato. And of course, President Bush's dad meeting a grocery store scanner for the first time was priceless – as was President Carter's tale of being attacked in a rowboat by a rabbit.

But what about Barack Obama?

[cnn-photo-caption image= http://i2.cdn.turner.com/cnn/2008/images/07/16/art.obamaad0716.cnn.jpg caption="Obama’s second national security spot this week focuses on loose nukes."]
(CNN) — Barack Obama has released his second ad with a national security focus in as many days Wednesday, amid a week of events designed to highlight the presumptive Democratic nominee’s credentials on that front.

In the new 30-second spot, “Changing World” – which, like “America’s Leadership” Tuesday, does not mention Iraq and Afghanistan - Obama again highlights his work on the Senate Foreign Relations Committee to end the smuggling of loose nuclear weapons. The ad debuted on the same day he held a summit on the issue in Indiana, featuring prospective VPs Senator Evan Bayh and former Senator Sam Nunn as panelists.

“Forty years ago it was missile silos and the Cold War,” says the announcer, over images of missiles and other security threats. “Today, it’s cyber attacks…loose nukes…oil money funding terrorism.

“Barack Obama understands our changing world. On the Foreign Relations Committee, he co-sponsored a law to lock down loose nuclear weapons. As president, he’ll rebuild our alliances to take out terrorist networks, and fast-track alternatives so we stop spending billions on oil from hostile nations,” continues the announcer. “New leadership for a changing world.”

The ad will run on national cable starting Thursday.

"It's time to send a clear message to the world: America seeks a world with no nuclear weapons," the White House hopeful said.

The remarks, delivered at Purdue University in Indiana before a roundtable discussion with foreign policy experts, come as the senator from Illinois is preparing for a trip abroad. Obama also is seeking to gain traction on national security issues.

(CNN) - Who Obama is campaigning with Wednesday just might get more attention than what the presumptive Democratic presidential candidate says.

The Illinois senator is set to be joined on the trail by Indiana Sen. Evan Bayh and former Georgia Sen. Sam Nunn - two Democrats widely believed to be on the shortlist for the vice presidential spot.

Election Center: Who's on Obama's shortlist

The two are set to join Obama at Purdue University in West Lafayette, Indiana for a discussion on national security issues - a forum that is designed to set to stage for the Democratic president candidate's overseas trip next week.

Bayh, who comes from a powerful Indiana family and once served as governor of the state, remains a very popular figure there. His aggressive campaigning on behalf of Hillary Clinton during the state's Democratic primary is widely seen as a chief factor for the New York senator's narrow victory there. He briefly flirted with his own presidential bid late last year but ultimately ruled against it.

Nunn remains one of the most respected national security and foreign policy experts on the national scene. The former senator has a serious, no-nonsense demeanor that would add instant gravitas to the ticket, and he is a popular figure in Georgia - a state the Obama campaign hopes to make competitive this cycle.

Both Nunn and Bayh have remained tight-lipped when it comes to the VP slot, though Bayh did acknowledge last month he would take the position if asked.

WASHINGTON (CNN) - President Bush has blocked the release of Vice President Dick Cheney's interview with investigators probing the leak of a CIA agent's identity, invoking executive privilege Wednesday to keep that document and others under wraps.

Bush asserted the privilege claim at the request of Attorney General Michael Mukasey, who has been under pressure from a congressional committee to turn over the transcript of Cheney's interview, White House spokesman Tony Fratto said. Mukasey argued that releasing the transcript would discourage
future witnesses from being questioned outside grand jury proceedings.

The records stem from the investigation into the 2003 exposure of CIA agent Valerie Plame Wilson, whose husband had accused the Bush administration of twisting the intelligence used to justify the invasion of Iraq. Cheney's chief of staff, Lewis "Scooter" Libby, was convicted of obstructing justice and perjury in connection with the disclosure, but was not charged with leaking her name.