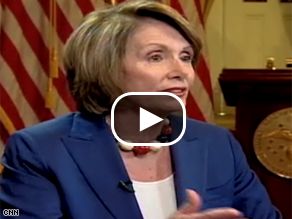 "God bless him, bless his heart, President of the United States - a total failure, losing all credibility with the American people on the economy, on the war, on energy, you name the subject," Pelosi told CNN's Wolf Blitzer in an exclusive interview.

The comments came two days after the president sharply criticized Congress over what he described as relative inaction over the course of the legislative term. In a press conference at the White House Tuesday, Bush noted there was only 26 legislative days left in the fiscal year and said Congress would need to pass a spending bill every other day to "get their fundamental job done."

"This is not a record to be proud of and I think the American people deserve better," Bush said.

In the interview, Pelosi said the president was in no position to criticize Congress and brushed aside the criticisms as "something to talk about because he has no ideas."

"For him to be challenging Congress when we are trying to sweep up after his mess over and over and over again - at the end of the day, Congress will have passed its responsibility to pass legislation," she said.

But Pelosi's comments come as a new Gallup poll registers the lowest level of congressional approval among Americans in the polling organization's 30-year history of conducting that survey.

That poll showed its approval rating had reached an anemic level 14 percent - while more than 70 percent said they disapproved of the job Congress is doing.

The House Speaker said she doesn't consider those numbers a negative referendum on the Democrats in charge, saying she thinks they stem largely from Congress' failure to end the war in Iraq.

END_OF_DOCUMENT_TOKEN_TO_BE_REPLACED

[cnn-photo-caption image= http://i.l.cnn.net/cnn/2008/images/01/23/art.cepd.cnn.jpg caption="CNN=Politics Daily is The Best Political Podcast from The Best Political Team."]
(CNN) — Sen. Barack Obama’s highly publicized trip overseas could very well be one of the biggest events during the presidential race.

As the presumptive Democratic nominee prepares to leave for the Middle East and Europe, he is facing questions about his limited experience, especially in the area of foreign policy. Senior Political Correspondent Candy Crowley has the story on the challenges and high expectations generated by Obama's planned trip abroad.

Meanwhile: Sen. John McCain is questioning Obama’s motives for making the trip and slamming Obama's Iraq policy. Dana Bash reports on the presumptive Republican nominee's efforts to make the most of his rival's much publicized and much anticipated trip.

[cnn-photo-caption image= http://i2.cdn.turner.com/cnn/2008/images/07/17/art.mccain.obama.iraq.docum.jpg
caption="McCain and Obama have been trading flip-flopping charges."]
(CNN) - The McCain and Obama campaigns traded flip-flopping charges Thursday, as the McCain team continued its assault on Barack Obama’s Iraq policy ahead of his upcoming trip to that nation Thursday with a hard-hitting Web video that painted Obama as an opportunist on the issue - and a tough Democratic response accused the Arizona senator of dramatically shifting his own positions on the war.

The film opens with 2007 footage of Obama saying "I am not persuaded that 20,000 additional troops in Iraq is going to solve the sectarian violence there. In fact, I think it will do the reverse."

Obama is next shown earlier this year saying he had known the surge would be effective. "I said at the time, when I opposed the surge, that given how wonderfully our troops perform, if we place 30,000 more troops in there, then we would see an improvement in the security situation and we would see a reduction in the violence."

The screen then reads, "Translation: You're Never Wrong If You Pretend You Gave The Right Answer All Along."

END_OF_DOCUMENT_TOKEN_TO_BE_REPLACED

[cnn-photo-caption image= http://i2.cdn.turner.com/cnn/2008/images/07/17/art.al.gore.7.17.jpg
caption="McCain and Obama praised Gore Thursday for his climate change initiative."]
(CNN)– Both parties' presumptive nominees praised former Vice President Al Gore as he challenged the nation Thursday to transition completely to renewable and carbon-free energy within the next decade - but parted ways on some of Gore's recommendations.

"For decades, Al Gore has challenged the skeptics in Washington on climate change and awakened the conscience of a nation to the urgency of this threat," Obama said in a statement Thursday.

Obama's environmental proposals mimic many of Gore's own: he would implement an economy-wide cap-and trade program to reduce greenhouse gas emissions, and plans to make the United States a leader in the global effort to combat climate change.

But John McCain reminded reporters he and Gore hold very divergent views on the use of at least one renewable energy source.

"I've admired the Vice President on this issue," McCain said Thursday. There may be some aspects of climate change that he and I are in disagreement on but overall - I mean, I've always been a supporter of nuclear power and he has not agreed with that."

The Arizona senator co-sponsored cap-and-trade legislation introduced last year - but has criticized later versions of the bill for failing to include further incentives for nuclear power, saying the nation would not make progress in ending global warming unless nuclear energy was greatly expanded.

McCain also continued to contrast his environmental policy with Obama's.

"Let me just say again, Sen. Obama, no storage and no reprocess. And that's nuclear power. No drilling offshore. That's a way of finding oil and gas reserves. Dr. No," McCain said.

(CNN) - Joe Biden is quickly becoming a powerful ally for Barack Obama in the Senate.

The Delaware Democrat, who is rumored to be on Obama's shortlist for VP, came to the Illinois senator's defense Thursday over charges Obama has not adequately addressed Afghanistan as chairman of a Senate Foreign Relations subcommittee.

Obama is chairman of the Subcommittee on European Affairs - a panel that has jurisdiction over NATO's operations, including its efforts in Afghanistan. The McCain campaign, like Hillary Clinton's, has noted Obama has yet to hold a hearing dealing with Afghanistan since he became chairman nearly two years ago. South Carolina Sen. Jim DeMint, the ranking member on that committee and an ardent supporter of John McCain, wrote a formal letter earlier this week to Obama criticizing his failure to hold hearings - a move seemingly designed to undercut the Democratic presidential candidate's foreign policy credentials before he embarks on a trip abroad.

But Biden, conveniently the Chairman of the full Senate Foreign Relations Committee, hit back at DeMint Thursday, writing in a letter to him that NATO's mission in Afghanistan has been dealt with at the full committee level.

"Under my chairmanship the Foreign Relations Committee has addressed most Afghanistan issues at the Full Committee level," Biden wrote. "I believe that this is the best way of ensuring the most comprehensive examination of the complex issues involved, and of ensuring the highest-level Administration participation."

The move is likely to increase speculation Biden is being considered for the VP role, or another high-ranking post in an Obama administration. The veteran senator is considered an authority on foreign policy issues - an area where many voters have given the edge to McCain over Obama. Biden made news earlier this month when he acknowledged he would accept the VP position if it was offered.

Biden said the full committee has held three hearings over the last two years directly dealing with NATO and Afghanistan. But the Republican National Committee quickly noted Obama missed two of those hearings, and said Biden is "attempting to refine Obama's empty record on Afghanistan." (The RNC also noted Biden called Obama a "Johnny come lately" on the issue of Afghanistan last August when he was battling for the Democratic nomination.)

END_OF_DOCUMENT_TOKEN_TO_BE_REPLACED

(CNN) - John McCain’s aides may not like it, but they know it's inevitable: Barack Obama's trip overseas is guaranteed to generate a lot of coverage.

And they say while Obama is abroad, McCain will spend the week sticking to issues that voters care most about, namely the ailing economy.

But now, McCain is using every opportunity he can get to come down on Barack Obama's Iraq policy.

While at a Kansas City town hall Thursday, unprompted, the presumptive Republican nominee tweaked Obama for his upcoming trip abroad.

"I know that Senator Obama is going to Iraq," he said. "I was very interested that he articulated and announced his policies and [approach to] Iraq before he went."

Ironically, it was McCain himself who encouraged the Illinois senator to go.

"It's now coming up on 900 days since he last visited Iraq, since before the surge," McCain said last month in Pennsylvania. "I hope that he goes as quickly as possible, with or without me."

The Republican National Committee has a running clock on its Web site showing how many days, hours, and seconds it has been since Obama last visited Iraq.

Since the June 28 news that Obama was planning to make a trip to Iraq, the McCain campaign has been working up their response plan.

END_OF_DOCUMENT_TOKEN_TO_BE_REPLACED

McCain: 'We have succeeded in Iraq'

McCain made the comments amidst a debate this week over the direction of the Iraq war, and in the wake of new national poll numbers that show McCain with a clear advantage over Obama on national security issues.

Both candidates gave speeches Tuesday outlining new policies toward Afghanistan, but each presented very different plans for Iraq. Obama is scheduled to travel to Iraq as part of a congressional delegation in the coming days.

"The strategy has worked and we now have the Iraqi government and military in charge in the major cities in Iraq," McCain said. "Al Qaeda is on their heels and on the run."

McCain said "the success we have achieved is fragile and could be reversed" if Obama - whom McCain accused of "incredible naivete" - carries through with his plan to withdraw combat troops within 16 months of taking office.

END_OF_DOCUMENT_TOKEN_TO_BE_REPLACED

McCain's strongest denunciation of Obama came when discussing the Democrat's health care plan, which would cost $50-65 billion per year but would not mandate insurance coverage for all adults, only children.

"My friends, we've seen this movie before," McCain said. "It was called 'HillaryCare' back in 1993, and we're not going to do it again. We're not going to have the government take over the health care system in America."

At a later moment in the town hall, when stressing his own bipartisan record, McCain accused Obama of generally having "the most extreme record of any member of the United States Senate."

END_OF_DOCUMENT_TOKEN_TO_BE_REPLACED

Cafferty: Why does Obama get more news coverage than McCain?

When Barack Obama travels overseas to Europe and the Middle East, he won't be alone.

Obama's trip is becoming a media extravaganza. All three network anchors will join him – broadcasting their nightly newscasts from stops along his route. Also along to record Obama's every move, top political reporters from major newspapers and magazines. 200 journalists have asked to join Obama on the trip, although the campaign will only be able to accommodate about 20% of them.

Meanwhile, Republican John McCain has taken 3 foreign trips in the last 4 months, and not a single network anchor has gone on any of them. It's causing some concern among Republicans that the news media aren't giving balanced coverage.

“What happened was that the conservative press—Fox News and the National Review and columnists of every ilk—went fairly deliberately at her in a pretty systematic way,” Obama told Glamour Magazine.

Watch: What kind of first lady would Michelle Obama be?

“[Our wives] should be treated with respect and if there's any disrespectful conduct on the part of anyone, those people should be rejected,” McCain told CNN last month.

Obama emphasized the plea in the interview released Wednesday, saying his wife and Cindy McCain are not fair game because “essentially, spouses are civilians. If you start being subjected to rants..day in day out, that’ll drive up your negatives.”