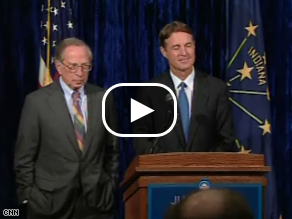 In a press conference following a campaign-sponsored roundtable discussion on emerging terrorist threats, Bayh and Nunn were bombarded by questions over reports both Democrats are on Obama's shortlist for vice president.

But Bayh, a senator from Indiana, and Nunn, a former senator from Georgia, revealed little about the Obama campaign's vetting process and their own ambitions for the job.

"I have never aspired to that office," said Nunn, who served in the Senate for 25 years. "It is always nice to have your name mentioned - it is an honor - but I have no expectation of being offered any office, and I am not in any way sitting on the edge of a chair ready to go back into government."

Nunn, one of the most respected Democratic voices on national security policy, seems to encounter vice presidential speculation every election cycle, given his appeal in the South and strength on issues where Republicans usually have the edge.

Bayh, a former supporter of Hillary Clinton who also has red-state appeal, also brushed aside speculation he is being considered a spot on the ticket.

"I love serving the people of Indiana - and I think any questions about the vice presidential thing are understandable and it’s good for my ego, but I should probably let Senator Obama and his campaign address those kind of questions," he said.

One reporter asked the senator — whose father Birch Bayh ran for president in 1976 - if he was taking his name out of the VP running.

"I've got a plane to catch," he responded, chuckling.