(CNN) - Focus on the Family Founder James Dobson said Monday he may endorse John McCain's White House bid - a major reversal for the evangelical leader who has been a longtime foe of the Arizona senator.

In a pretaped Focus on the Family radio broadcast, Dobson officially softened his stance toward McCain, saying, "I never thought I would hear myself saying this while I am not endorsing Sen. John McCain, the possibility is there that I might."

Dobson, who once said he could never bring himself to endorse McCain, also says during the broadcast that while he continues to disagree with the Republican presidential candidate on a host of issues, generally he is closer to McCain than he is to presumptive Democratic presidential nominee Sen. Barack Obama.

"The fact (is) that I'm so very concerned about Sen. Obama and what he believes and stands for, as well as the need to rethink some of my views regarding Sen. McCain. And that thinking has taken place and continues to do so," Dobson also said on the radio program.

"This has been the most difficult moral dilemma for me. It's why you haven't heard me say much about it because I have struggled on this issue and there's some concerns here that matter to me more than my own life. And neither of the candidates is consistent with my views in that regard."

Dobson, one of the most powerful figures in the evangelical community, has been a longtime critic of McCain, especially after it became clear the Arizona senator would win his party's presidential nomination. In addition to declaring he would not endorse or vote for McCain, Dobson said last April the Republican presidential candidate was fracturing the Republican Party and was
"intent on driving away" conservatives.

END_OF_DOCUMENT_TOKEN_TO_BE_REPLACED

[cnn-photo-caption image= http://i2.cdn.turner.com/cnn/2008/images/07/21/art.mccain.ap.jpg caption="McCain is criticizing Obama's Iraq policy."]
(CNN) - In the world of politics, it used to be a hard-and-fast rule: "Politics ends at the water's edge" - the old Washington practice that when politicians used to travel abroad, their political opponents often refrained from criticism, at least with regards to foreign policy.

But as Barack Obama continues his trip throughout the Middle East, John McCain sharply criticized the Illinois senator Monday morning over his initial opposition to the surge policy in Iraq and his short resume in dealing with foreign affairs.

But McCain aides told CNN last week they consider the trip chiefly political in nature - an attempt by Obama to burnish his foreign policy credentials - and said both his campaign and the Democratic National Committee shattered precedent by attacking McCain while he was in Europe and the Middle East in March, and during his recent trips to Canada, Colombia and Mexico.

Listen: McCain camp on the offense

"Sen. Obama has said this is going to be a listening tour. We certainly hope very sincerely he listens to the advice of our military commanders," McCain senior foreign policy adviser cheunemann said in a campaign conference call Monday morning. "The question is whether he will listen to them. Or will he ignore their military judgment on the importance on having a conditions based withdrawal and supplant it with his own military assessment which is really based on a political calculation rather than any experience he has."

Those comments echoed the remarks of McCain earlier Monday.

END_OF_DOCUMENT_TOKEN_TO_BE_REPLACED

In an informal ceremony held at the site Monday morning, a cardboard "key" to the arena was presented to Republican officials, who have officially rented the facility until at least September 4. Soon after, around 100 workers began filing in to begin the physical changes.

Eventually, 600 workers are slated to labor on-site. Rows of chairs will be removed; box suites will be turned into television studios.

"It's technically a construction site, but we're not really constructing anything," said convention press secretary Joanna Burgos. "It's really just aesthetics inside - a lot of refurbishing and transforming into something else."

Obama and Petraeus meet in Baghdad 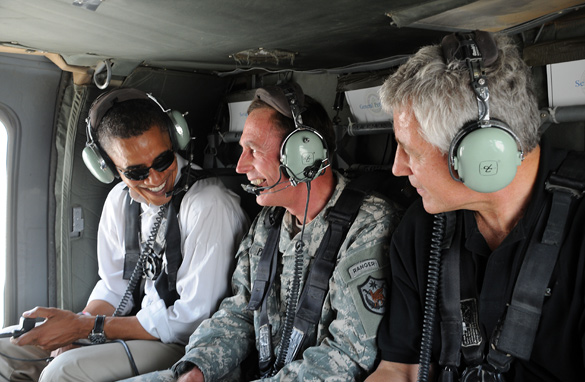 "Because some in Washington are still saying no to drilling in America. No to independence from foreign oil. Who can you thank for rising prices at the pump?" continues the announcer.

"Obama, Obama" chants are then heard in the commercial.

The announcer continues, saying that "one man knows we must now drill more in America and rescue our family budgets. Don't hope for more energy. Vote for it. McCain."

END_OF_DOCUMENT_TOKEN_TO_BE_REPLACED

An official with al-Maliki's office described the meeting as "very good and successful for both sides," and said Obama, the presumptive Democratic presidential candidate, praised the prime minister's leadership.

Obama expressed his support for the Iraqi government and noted that the passage of important legislation, such as laws addressing the production and distribution and oil revenue, would help strengthen the country, said the official, adding that Obama emphasized he was speaking in his role as a U.S. lawmaker.

The one-time Republican presidential candidate made the comments as he visited Yankee Stadium with presumptive GOP nominee John McCain.

On the field before the Yankees took on the Oakland A’s, Giuliani told reporters, “the fact that Barack Obama is now making his first tour, in essence, of the world is an indication that John McCain is the man with the experience. John doesn't have to go for the first or second time to these places. He has been going there for 20-30 years. He knows the world. He understands the world.”

Obama has previously visited Iraq and other countries overseas, but this was his first visit to Afghanistan.

Giuliani said, “Without any disrespect to the other side, he's just so far more experienced that I think America will elect him. I think the American people are going to take a look and say we have got to be very serious about this…we need a man that has experience and John McCain has that experience."

Criticizing Obama’s strategy on Iraq, the former mayor said, “I think if you look at Senator McCain's record on Iraq – you don't fail to elect him president. He was right about Iraq when almost everybody else was wrong. It has turned out that if we had caved in the way Barack Obama and the democrats wanted we would now have a defeat. America would have a defeat rather than a possible victory.”

[cnn-photo-caption image= http://i2.cdn.turner.com/cnn/2008/POLITICS/07/21/obama.mideast/art.obama.afghan.ap.jpg caption="Obama arrived in Iraq Monday."] BAGHDAD, Iraq (CNN) - Barack Obama - the presumptive Democratic presidential candidate who has made ending the Iraq war a cornerstone of his historic run for office - huddled on Monday with Iraqi officials and coalition military commanders about the status of the grinding, bloody conflict, now in its sixth year.

It is the Illinois senator's second trip to Iraq, after a visit in 2006, and the latest leg of his overseas trip, which began in Kuwait and Afghanistan and will continue on to Jordan, Israel, the West Bank, Germany, France and England.

Obama - who is accompanied by two key Senate colleagues - arrived Monday afternoon in the southern city of Basra, according to U.S. Embassy spokesman Armand Cucciniello.

Obama then traveled to Baghdad, where he was to meet Gen. David Petraeus, the head of U.S. troops in Iraq, U.S. Ambassador to Iraq Ryan Crocker and Iraqi Prime Minister Nuri al-Maliki.

END_OF_DOCUMENT_TOKEN_TO_BE_REPLACED

CNN Washington Bureau
NY Times: Comment Stings Maliki as Obama Arrives in Baghdad
On the eve of Senator Barack Obama’s visit to Iraq, its prime minister tried to step back Sunday from comments in an interview in which he appeared to support Mr. Obama’s plan for troop withdrawal.

New York Sun: Obama, Maliki May Soon Talk of a Timeline
When Senator Obama arrives in Baghdad this week, he will have a chance to hear directly from Prime Minister al-Maliki whether the Iraqi leader supports the 16-month withdrawal timeline that Mr. Obama has embraced on the campaign trail.

CNN: Barack Obama arrives in Iraq
Presumptive U.S. Democratic presidential candidate Barack Obama arrived in Iraq on Monday for talks with Iraqi officials and U.S. commanders over a 5-year-old war he has pledged to end, a U.S. Embassy spokesman said.

Washington Times: Obama ups ante on Afghans, Pakistanis
Sen. Barack Obama on Sunday prodded Afghanistan and Pakistan to do more to combat al Qaeda and Taliban forces using those nations as bases of operations, as the presumptive Democratic presidential nominee used a campaign-season trip to Afghanistan to bolster his leadership credentials.

CNN: Sunday Roundup: Foreign affairs on the agenda
A roundup of quotes from the Sunday political talk shows, as compiled by the CNN Wire.