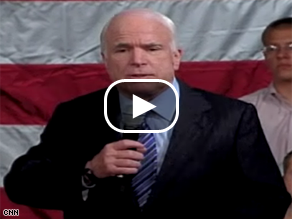 “By continuing his opposition to the surge strategy long after it has proven successful and by admitting that his plan for withdrawal places him at odds with General David Patraeus, Barack Obama has made clear that his goal remains unconditional withdrawal rather than securing the victory our troops have earned and the surge has made possible," McCain spokesman Tucker Bounds said.

The McCain campaign is also conducting a conference call with Rep. Heather Wilson, Sen. Sam Brownback, and McCain adviser Randy Scheunemann to keep up the pressure on Obama.

UPDATE: McCain himself also took a swipe at Obama over his Iraq policy at a New Hampshire town hall Tuesday.

"You might recall that Senator Obama, my opponent, said the surge would not succeed, that he wanted us out. If he had his way, we'd been out last March. .. We would have had defeat," he said. "And my friends, that would have been a catastrophe for the United States of America. He was wrong then, he's wrong now and he still failed to acknowledge that the surge succeeded ... remarkable, remarkable. "

Your chance to quiz John McCain

[cnn-photo-caption image= http://i2.cdn.turner.com/cnn/2008/images/07/22/art.mccain.smiles.jpg caption="Do you have a question for presumptive Republican nominee John McCain?"]
(CNN)–Now you can be in "The Situation Room!" Senator John McCain, Republican presidential candidate, will be a guest Friday and you can ask him a question yourself. What issues matter most to you? Do you want to know more about what kind of president he would be? Submit your questions today, and be sure to keep them clear and concise. We’ll pick the best ones to be used on air.

(CNN) - John McCain is set to meet with Louisiana Gov. Bobby Jindal Wednesday, a move that is certain to increase speculation the Arizona senator is seriously considering the 37-year-old Republican for his running mate.

News of the meeting, first reported by the Washington Post, comes amid reports the McCain campaign has mulled the possibility of naming the vice presidential candidate later this week in an effort to steal the media spotlight from Barack Obama's trip overseas. Sources close to the Republican presidential candidate have indicated that scenario is one of several possibilities that have been recently discussed.

Speculation first swirled around Jindal earlier this summer when he was one of a handful of politicians McCain invited to his Sedona, Arizona ranch. The long weekend was described as purely social, though former Massachusetts Gov. Mitt Romney and Florida Gov. Charlie Crist were also in attendance.

Jindal is considered a boy wonder of sorts within the Republican Party, and has been lauded by several conservatives wary of John McCain - including talk-radio host Rush Limbaugh. But the decision would undercut one of the Arizona senator's chief arguments against Obama: his relative lack of experience. The Louisiana governor is nearly 10 years younger than the Democratic presidential candidate.

iReport: Who should be VP? Weigh in!

Jindal has remained mum on whether he is interested in or being formally vetted for the vice presidency. 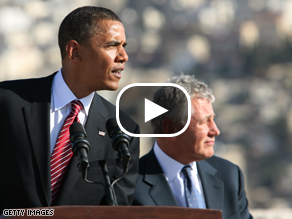 (CNN) - Sen. Barack Obama said Tuesday he was pleased with the reduction of violence in Iraq since the deployment of more U.S. troops, but said it was a result of several factors, not just the surge.

"I am pleased that as a consequence of great effort by our troops - but also as a consequence of a shift in allegiances among the Sunni tribal leaders, as well as the decision of the Sadr militias to stand down - that we've seen a quelling of violence," he said.

But, Obama said, a functioning Iraq will ultimately depend on the capacity of the Iraqi people to unify themselves, get beyond sectarian divisions and set up a government that works for the people.

[cnn-photo-caption image= http://i2.cdn.turner.com/cnn/2008/images/07/22/art.ronpaul.7.22.jpg caption="Ron Paul will hold his own Rally August 31 through September 1."]
(CNN)— Former Republican presidential candidate Ron Paul is moving forward with plans for his own rally during the Republican National Convention —and is moving his location to a larger arena to accommodate the unprecedented response.

The three day event called ‘Rally for the Republic’ will officially launch Paul’s new political action group: the ‘Campaign for Liberty.’ When planning for the event began earlier this year, it was originally scheduled to take place at the University of Minnesota, but due to a “strong initial response,” it was moved to The Target in Minneapolis, which can house up to 18,000 people.

"The Rally for the Republic will send a powerful, positive message to the Republican Party that there is an army of grassroots activists across the country ready to work with them if steer back to their traditions of limited government and personal liberty," said Campaign for Liberty spokesman Jesse Benton.

Paul, who has often voiced his differing policy views from presumptive Republican nominee John McCain, has made it clear in past interviews with CNN his supporters won’t be in Minneapolis to interfere or cause problems for the Republican Party.

From August 31 through September 1, the former presidential dark horse will hold a series of grassroots leadership and training events culminating with a “celebration of traditional Republican values,” where Grover Norquist, Tucker Carlson, Gov. Gary Johnson, Barry Goldwater Jr. and Bruce Fein are expected to speak. 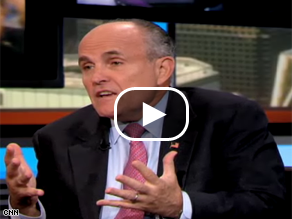 Watch Giuliani take aim at Obama over his Iraq comments

(CNN) - As part of John McCain's plan to maintain pressure on Barack Obama over Iraq, the Arizona senator plans to take aim at the Illinois senator over his comments to ABC Monday night suggestion he would still oppose the surge policy.

In an interview with ABC's Terry Moran, Obama - who initially opposed the surge of troops in the war torn country in January 2007 - said he would still oppose the policy, even though it has been credited with curbing violence.

"These kinds of hypotheticals are very difficult," he said. "You know, hindsight is 20/20. But I think that what I am absolutely convinced of is that, at that time, we had to change the political debate because the view of the Bush administration at that time was one that I just disagreed with."

"The reality is, that Iraq is now 80 percent safer than it was a year ago, before the surge," Giuliani said. "The fact is, everyone is talking about the fact that it is successful. And the reason that we can talk about withdrawal on success, rather than withdrawal with loss and ignominy, which is what we were talking about earlier, is because the surge was successful. It would seem to be he would admit he made a mistake in not supporting the surge."

Obama defended the remarks Tuesday, telling reporters that it was unclear what would have happened if the plan he had advanced in January 2007 to push the Iraqis towards political reconciliation, and commence a phased withdrawal, had been adopted.

“I am pleased that as a consequence of great effort by our troops, but also as a consequence of a shift in allegiances among the Sunni tribal leaders as well as the decision of the Sadr militias to stand down, that we've seen a quelling of the violence,” he added.

END_OF_DOCUMENT_TOKEN_TO_BE_REPLACED

The day ahead: McCain to keep up Iraq pressure

At a town hall in New Hampshire, McCain will continue to target Obama for his initial opposition to the surge policy. The Arizona senator is also slated to again take aim at Obama for what he will say is his rival's continued refusal to acknowledge conditions on the ground have improved.

"He'll make the case that...his refusal to see the success on the ground despite universal agreement among Americans shows that he doesn't have the judgment to move American troops forward to victory – only withdrawal and defeat, because that's all Obama has ever supported," McCain spokesman Tucker Bounds said.

Related: With spotlight on Obama, McCain steps up attacks

McCain camp: Talk of a VP announcement this week

[cnn-photo-caption image= http://i2.cdn.turner.com/cnn/2008/images/07/21/art.mccain07.gi.jpg caption="McCain aides hope VP speculation grabs some of the spotlight from Obama."] (CNN) - Sources in John McCain's campaign confirm to Dana Bash and Gloria Borger that there have been recent discussions high in the campaign about the possibility of naming a running mate this week.

One source tells CNN that “no decision has been made” by the candidate. Another says that some within the campaign are arguing to hold off until Obama has named his decision “so there is an opportunity to counter-program.” In any case, a campaign source adds, this does mean that the choice has been “narrowed” in McCain’s mind to the point where he could, if he were so inclined, spring a decision this week.

Campaign spokesperson Jill Hazelbaker said Monday “there will be no announcement this afternoon.”

The prospect of a McCain vice presidential announcement this week, first reported by Bob Novak on the Human Events Web site, would obviously change the subject from Barack Obama’s trip to the Middle East and Europe.

In fact, even some of McCain’s own advisers admit that just leaking the possibility of a VP selection could take some of the attention away from Obama - which could, in fact, be what the campaign is trying to do.

END_OF_DOCUMENT_TOKEN_TO_BE_REPLACED

[cnn-photo-caption image= http://i2.cdn.turner.com/cnn/2008/images/07/22/art.obamajordan.ap.jpg caption="Obama arrived in Jordan on Monday."]AMMAN, Jordan (CNN) – Senator Barack Obama arrived in Jordan Tuesday Morning to begin what his campaign describes as days of back-to-back in-depth meetings with world leaders where the topics of Afghanistan, Iraq and Iran promise to loom large.

Obama, along with Senators Chuck Hagel, R-Nebraska, and Jack Reed, D-Rhode Island, wrapped up several days of assessing the situation in Afghanistan and Iraq. The three will hold a news conference at the historic Amman Citadel before attending a small dinner with Jordanian King Abdullah. Obama will also have a one-on-one meeting with the king where aides say the Israeli-Palestinian peace process will likely be discussed.

END_OF_DOCUMENT_TOKEN_TO_BE_REPLACED

JERUSALEM (CNN) - An Israeli civilian and a police officer shot and killed the Palestinian driver of an earth-moving machine on Tuesday after he rammed his backhoe into several vehicles in downtown Jerusalem, police and government officials said.

One person was "moderately-to-seriously wounded" and four others sustained minor injuries in the attack, according to an Israeli government statement, citing Jerusalem's police chief.

The driver was identified by Israeli police as a Palestinian from East Jerusalem. The attack happened three weeks after a Palestinian construction worker went on a similar rampage in Jerusalem, killing three.

The driver in Tuesday's attack struck several vehicles, including a No. 13 city bus, before a civilian and an Israeli border policeman shot him, a government statement said.