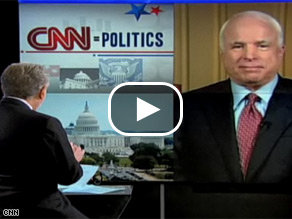 (CNN) - Sen. John McCain on Friday said that as president he would consider bringing Osama bin Laden to justice through a Nuremberg-like international trial.

He told CNN’s Wolf Blitzer: “We have various options. The Nuremberg Trials are certainly an example of the kind of tribunal that we could move forward with. I don’t think we’d have any difficulty in devising an international - internationally supported mechanism that would mete out justice. There’s no problem there.”

McCain said that it would be a “good thing to reveal to the world the enormity of this guy’s crimes, and his intentions, which are still there.”

When asked if as president he would move the U.S. embassy in Israel from Tel Aviv to Jerusalem, the presumptive GOP presidential nominee unequivocally stated, “Yes." Asked when, he said, "Right away.”