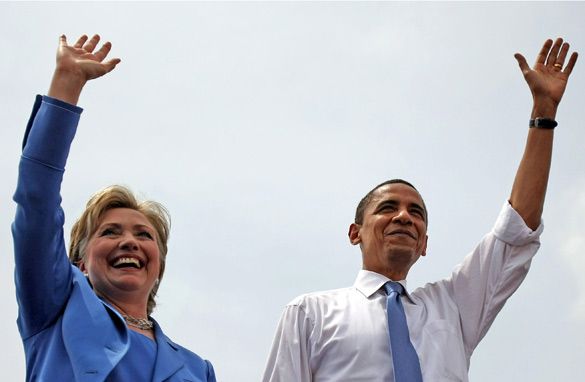 "He’s practicing the politics of the past," the ad's narrator says as headlines from various medial outlets stating McCain has gone negative flash across the screen.

McCain's ad, released earlier Wednesday declares Obama "the biggest celebrity in the world," while flashing images of both Hilton and Spears.

"But is he ready to lead? With gas prices soaring, Barack Obama says no to offshore drilling and says he'll raise taxes on electricity. Higher taxes, more foreign oil - that's the real Obama," the ad's narrator says while crowds screaming, "Obama!" are shown.

The McCain ad is the latest in a string of hard-hitting television commercials from the McCain campaign. Earlier spots suggest Obama is playing politics with the Iraq war, is against funding American troops and bears some of the responsibility for high gas prices.

UPDATE: Tucker Bounds, spokesman for the McCain campaign, released the following statement in response to the Obama campaign's new "Low Road" ad: "Pointing out your opponent’s worldwide celebrity is not the ‘low road,' and neither is pointing out that he opposes oil drilling and supports higher taxes.”

[cnn-photo-caption image= http://i.l.cnn.net/cnn/2008/images/01/23/art.cepd.cnn.jpg caption="CNN=Politics Daily is The Best Political Podcast from The Best Political Team."]
(CNN) –The McCain campaign wants to know: do you want to elect “the biggest celebrity in the world?"

In the latest episode of CNN=Politics Daily, Dana Bash reports on John McCain’s new ad released Wednesday. You won’t believe who makes an appearance along with Sen. Barack Obama, the presumptive Democratic nominee.

There has been a lot of talk recently about Sen. Barack Obama’s vice presidential contenders, but Hillary Clinton seems to have faded from conversation. Suzanne Malveaux examines Clinton’s chance of making it onto Obama’s presidential ticket.

And Obama was well received abroad; how did he fair at home? Senior Political Analyst Bill Schneider takes a look at a new poll that may have the answer.

Finally, Alaska Sen. Ted Stevens’ indictment may further damage the Republican Party in what is already a tough year for the GOP. Brian Todd investigates.

The song, called "Politics: Obama Is Here," was released earlier in the day and refers to the New York senator as an "irrelevant b***h." Ludacris, whose real name is Chris Bridges, also takes aim at John McCain in the song, saying the Arizona senator "don't belong in ANY chair unless he's paralyzed."

The song, which largely celebrates the rise of Obama on the national political scene, also criticizes the Rev. Jesse Jackson and President Bush.

Obama campaign spokesman Bill Burton said Ludacris should be "ashamed of these lyrics."

"As Barack Obama has said many, many times in the past, rap lyrics today too often perpetuate misogyny, materialism, and degrading images that he doesn’t want his daughters or any children exposed to," Burton said. "This song is not only outrageously offensive to Senator Clinton, Reverend Jackson, Senator McCain, and President Bush, it is offensive to all of us who are trying to raise our children with the values we hold dear. While Ludacris is a talented individual he should be ashamed of these lyrics."

Obama has praised Ludacris in the past and the two men sat down privately in 2006 together to discuss ways to empower youth.

Obama: Don’t let other side scare you

[cnn-photo-caption image= http://i2.cdn.turner.com/cnn/2008/images/07/29/art.obama.nevada.jpg caption="Obama criticized McCain's campaign tactics."]ROLLA, Missouri (CNN) - In the wake of John McCain’s new ad that paints Barack Obama as a global celebrity on par with Paris Hilton and Britney Spears, Obama told supporters at a rally Wednesday, “don’t let the other side scare you,” and said McCain is attacking him because Republicans know they don’t have the answers.

“He’s spending an awful lot of time talking about me. You notice that?” Obama asked a crowd of just over one thousand seated in a university gym. “I haven’t seen an ad yet where he talks about what he’s going to do. And the reason is because those folks know they don’t have any good answers, they know they’ve had their turn over the last eight years and made a mess of things."

“They know that you’re not real happy with them and so the only way they figure they’re going to win this election is if they make you scared of me,” Obama continued, repeating an attack from earlier in the day. “What they’re saying is ‘Well, we know we’re not very good but you can’t risk electing Obama. You know, he’s new, he doesn’t look like the other presidents on the currency, he’s a got a funny name.’”

Obama was more serious with a pool reporter at a diner stop on the way to Rolla when asked about McCain’s new ad, saying, “You need to ask John McCain what he’s for and not just what he’s against."

“This is a typically superfluous response from Barack Obama. Like most celebrities, he reacts to fair criticism with a mix of fussiness and hysteria,” wrote Bounds. “Barack Obama’s plans to raise taxes on energy and opposition to offshore drilling show that he fundamentally lacks judgment and experience, and is not ready to lead.”

END_OF_DOCUMENT_TOKEN_TO_BE_REPLACED

[cnn-photo-caption image= http://i2.cdn.turner.com/cnn/2008/images/07/30/art.paris.gi.jpg caption="Obama once compared himself to Paris Hilton."](CNN) - John McCain is facing criticism from many Democrats for likening Barack Obama to Paris Hilton, but the Illinois senator made the same comparison himself at a dinner in 2004.

"Andy Warhol said we all get our 15 minutes of fame," then Senator-elect Obama said at a Gridiron dinner in December, 2004. "I've already had an hour and a half. I mean, I'm so overexposed, I'm making Paris Hilton look like a recluse."

That attempt at self deprecating humor was delivered little more than a month after he was elected to the US senate, and just weeks before he was sworn in.

The same comparison was also made in September 2006, when speculation swirled about whether the still-very coy Obama would mount a presidential bid.

“Yeah, exactly,” Obama started to reply before Harkin jumped in and said, “Remember that movie with Robert Redford that was called 'The Natural, about a baseball player? This is the natural of politics.”

[cnn-photo-caption image= http://i2.cdn.turner.com/cnn/2008/images/07/30/art.richardson0730.gi.jpg caption="Sens. Obama and Clinton appeared with Gov. Richardson at a New Hampshire debate in January."]
(CNN) – Is Bill Richardson about to kiss and make up with the Clintons? It certainly looks that way.

Richardson, who served as secretary of energy in Bill Clinton’s administration, decided to endorse the Illinois senator, now the presumptive Democratic nominee. The move was viewed as an act of betrayal by some longtime supporters of the Clintons. CNN Political Analyst James Carville, who has long and deep ties to both Clintons, even likened Richardson’s endorsement to Judas’s betrayal of Christ.

In late April, Richardson responded to Carville’s criticisms by saying that Carville and other Clinton supporters believe they are a “dynasty” and that they were “clinging to the throne.”

Since announcing his support for Obama, Richardson has made numerous television and campaign appearances on Obama’s behalf. He is also mentioned as a potential pick for vice president.

In the statement from Richardson, Clinton spokeswoman Kathleen Strand said, "Senator Clinton is grateful for Governor Richardson's and Senator Obama's efforts to assist with retiring her campaign debt and she is looking forward to continuing to campaign for Senator Obama and help ensure victory for Democrats throughout the country this fall."

Senator Clinton will attend both invitation-only events in New Mexico in mid-August.

[cnn-photo-caption image= http://i2.cdn.turner.com/cnn/2008/images/07/30/art.obamatrippoll.gi.jpg caption="Obama's trip abroad did little to alter the presidential race."](CNN) - It was a weeklong trip that drew blanket media coverage and sharp criticism from Republicans, but Barack Obama's recent tour abroad did little to alter the standing of the presidential race, a new CNN/Opinion Research Corporation poll shows.

According to the survey - the first national poll conducted entirely after the Democratic presidential candidate's trip to Iraq, Afghanistan, the Middle East, and Europe - the race for the White House has remained virtually unchanged since late June, with Obama holding a 51-44 percent edge over Sen. John McCain. In a similar poll conducted one month ago, Obama held a 5-point lead over the senator from Arizona , 50-45 percent.

The CNN poll of polls, an average of several recent national surveys, tells the same story - a single-digit lead for Obama (48-45 percent) that keeps McCain within easy striking distance of his Democratic rival with less than 100 days before voters weigh in at the polls.

"Did Obama's trip help his standing with the public on foreign policy issues? Not really," CNN Polling Director Keating Holland said. "Obama has not picked up any ground against McCain on foreign issues and some 52 percent think McCain would do a better job than Obama on the war in Iraq - virtually the same number who felt that way in April."

But in what is good news for Obama, the poll suggests few of the McCain campaign's criticisms of the trip have stuck - especially charges Obama was presumptuously acting as if he had already won the election, and claims he nixed a visit with injured troops because members of the media could not accompany him.

Instead, more than two-thirds of voters surveyed said the trip was appropriate for a presidential candidate, and 72 percent think Obama cares abut veterans and the troops currently in Iraq.

SPRINGFIELD, Missouri (CNN) – In his first interaction with voters since returning from his overseas trip, Barack Obama is focusing on the economy on a bus tour in southwest Missouri Wednesday where the Illinois senator took his regular challenge to debate John McCain on taxes to a new level, invoking alleged local heritage.

“So we're going to research that ‘cause I'm ready to duel John McCain on taxes,” Obama added to laughter from supporters, “Right now, right here. I'm a quick draw.”

WATCH McCain: 'I will not raise your taxes'

A McCain spokesman shot back quickly with an e-mail to reporters asking, “If Barack Obama wants this so-called ‘duel’ than why did he and his entourage run for the hills when John McCain challenged him to ten town halls?”

END_OF_DOCUMENT_TOKEN_TO_BE_REPLACED

Cafferty: ‘Politicked out’ yet?

The 2008 presidential campaign has been a telethon without a disease. In fact, it will be the longest in American history.

First, the public was subjected to that 16-month long primary season, which included months of the Clinton-Obama drama. And that was just the warm-up act.

It's only July. Now were bombarded daily with non-stop coverage of the Obama-McCain throwdown, the daily back and forth, tit-for-tat between the two campaigns.

These candidates have been in the game for quite some time now, when you consider Barack Obama has almost been running for 2 years, since saying in October of 2006 that he was considering a run for president. John McCain might be at it even longer, dating back to his embrace of President Bush in the 2004 campaign.

And it's only going to get worse.