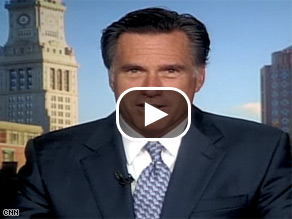 “Well, that's really sad. I didn't – I didn't know that Barack Obama had stooped to dishonesty,” Romney told CNN American Morning's Kiran Chetry. “John McCain's is humorous and it hits the nail on the head. Barack Obama's like an Internet date….”

Watch to find out what Romney meant, and how he's feeling about his VP chances.