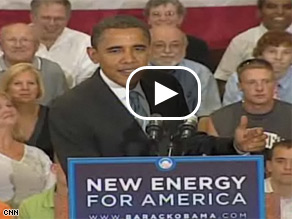 Watch Obama speak out against McCain and the Republican party.

BEREA, Ohio (CNN) – For almost a week, John McCain and his campaign have been mocking Barack Obama’s comments to a voter last week in Missouri when he told her to one way to conserve energy is “making sure your tires are properly inflated.”

Obama shot back at a town hall in Ohio Tuesday afternoon, accusing them of lying about his energy plan and ignoring what experts say would reduce gas consumption between 3 and 4 percent.

“It's like these guys take pride in being ignorant,” Obama told a packed gym. “They think it’s funny that they're making fun of something that is actually true. They need to do their homework.”

“Instead of running ads about Paris Hilton and Britney Spears, they should go talk to some energy experts and actually make a difference,” Obama added.

Both the RNC and McCain’s campaign responded by urging Obama to call for Congress to return from summer recess for a special session to pass an energy package.

END_OF_DOCUMENT_TOKEN_TO_BE_REPLACED

[cnn-photo-caption image= http://i.l.cnn.net/cnn/2008/images/01/23/art.cepd.cnn.jpg caption="CNN=Politics Daily is The Best Political Podcast from The Best Political Team."]
(CNN) - In the latest installment of CNN=Politics Daily, Pulitzer prize-winning author Ron Suskind claims that the White House went to disturbing lengths to justify the War on Terrorism. CNN’s Brian Todd reports on the accusations within the author’s controversial new book.

Will Dick Cheney attend the Republican National Convention in Minnesota? CNN’s Senior Political Analyst Bill Schneider takes a look at the GOP’s recent snub of the VP and how McCain’s camp factors into his attendance of the event.

Plus: Presumptive Democratic presidential nominee Barack Obama is confronted with the age limit question during a townhall debate. CNN’s Jessica Yellin reports on how the Illinois senator navigated around this “tricky question.”

Finally: Presumptive presidential nominees John McCain and Barack Obama have sharp policy differences on how to deal with the nation’s growing energy crisis—Including their positions on nuclear power. CNN White House Correspondent Ed Henry has the latest on the candidates’ recent attacks on their opponent’s energy policies while on the campaign trail.

The ad flashes to a video clip of McCain in May of 2003 saying he and President Bush are lockstep on most issues.

“The president and I agree on most issues. There was a recent study that showed that I voted with the president over ninety percent of the time…” McCain says in Obama’s ad.

The ad continues on by asking the viewer if McCain is in fact the “original maverick? Or just more of the same?”

END_OF_DOCUMENT_TOKEN_TO_BE_REPLACED

The event, taking place on the evening of September 2 in Geneva, Switzerland will be split into two parts: a reception and a dinner. According to Obama’s National Finance Committee, tickets for the reception where Clooney will speak are going for $1,000, followed by a dinner at the home of NFC member Charles Adams for $10,000 a plate. Space for the dinner is limited to 75 guests.

Clooney made headlines in February when he told CNN he was hesitant to campaign for the presumptive Democratic nominee, calling it a ‘slippery slope.’

“I feel that at times you can harm the person that you are trying to help,” Clooney told CNN’s Kiran Chetry in reference to campaigning for Obama. “I don’t want to damage anybody.”

The Academy Award winning actor officially endorsed Obama early last year calling him a ‘rock star.’ Clooney compared him to the likes of John and Robert Kennedy saying, “Few people in my lifetime, that I’ve heard speak made me want to get up and do something,” but cautioned, “I don’t want to hurt him by saying that.”

Although next months fundraiser is taking place overseas, the campaign specified only U.S. Citizens with a passport will be allowed to contribute to the campaign.

Bayh, a junior senator from the state and a major Hillary Clinton backer during the primary season, will introduce the presumptive Democratic nominee at a town hall in Elkhart, Indiana.

CNN Election Center: Who is on the VP short list?

END_OF_DOCUMENT_TOKEN_TO_BE_REPLACED

“Instead of offering a real plan to lower gas prices, the only energy plan that he's really promoting is more drilling,” Obama told supporters at a town hall meeting in Ohio, on the second day of a week of energy-themed events. “That's what he talked about yesterday. I want to drill here. I want to drill now. I don't know where he was standing. I think he was in a building somewhere.”

CNN Election Center: Where do the candidates stand on energy policy?

“This plan will not lower prices today, it won't lower prices during the next administration,” Obama continued. “The truth is we wouldn't see a drop of oil from John McCain's plan for at least seven years.”

Though Obama supported last week’s proposed “Gang of Ten” bi-partisan energy plan that includes an element of off-shore drilling, the Illinois senator has continued to rail against it and McCain and his campaign have been sure to remind voters. A recent CNN/Opinon research poll showed 69 percent of Americans support off-shore drilling.

The McCain campaign quickly fired back. “While Americans are hurting, Barack Obama is opposed to off-shore drilling, and is also opposed to admitting that he voted for the same corporate giveaways for Big Oil that he’s campaigning against today,” wrote McCain spokesman Tucker Bounds. “It underscores that Barack Obama isn’t being straightforward with voters and has the bad judgment Americans can’t afford right now.”

END_OF_DOCUMENT_TOKEN_TO_BE_REPLACED

[cnn-photo-caption image= http://i2.cdn.turner.com/cnn/2008/images/08/05/art.mccainnuke0805.ap.jpg caption="Sen. McCain slammed Sen. Obama at a press conference held in the shadow of a nuclear energy plant."]
NEWPORT, Michigan (CNN) – A day after Barack Obama released a television ad that accuses John McCain of seeking tax breaks for big oil, McCain struck back Tuesday, calling Obama “a little bit confused” because of their divergent votes on the 2005 energy bill, which contained tax breaks for oil companies.

McCain made the remarks to reporters after touring the Fermi 2 Nuclear Power Plant, a facility that provides power to 2.3 million customers in southeastern Michigan. McCain is an ardent supporter of nuclear power.

“I saw that Senator Obama's latest attack has got to do with oil and campaign contributions,” McCain said, referring to Obama’s new TV spot. “I think he might be a little bit confused because when the energy bill came to the floor of the senate, full of goodies and breaks for the oil companies, I voted against it. Sen. Obama voted for it. People care, not only what you say but how you vote.”

Obama was one of 25 Senate Democrats to support that energy bill, which the Illinois senator has said represented a compromise that removed several of the Bush administration’s original proposals.

“People are paying four dollars a gallon for gas, are sick and tired of a Congress that won't act in their behalf,” he said. “So I'm urging Senator Obama to urge the Democratic leaders of Congress to call Congress back into session.”

(CNN) – The CNN Poll of Polls has been updated to reflect a new AP-IPSOS poll. Sen. Obama now holds a five-point lead over Sen. McCain – 48 percent to 43 percent – with 9 percent of registered voters remaining unsure about their choice for president.

The latest CNN Poll of Polls is an average of the following four surveys: CNN/Opinion Research Corporation (July 27-29), AP-IPSOS (July 31-August 4), USA Today/Gallup (July 25-27), and Gallup tracking (August 2-4). The poll of polls does not have a sampling error.

Hillary Clinton to campaign for Obama

[cnn-photo-caption image= http://i2.cdn.turner.com/cnn/2008/images/08/05/art.unitywave0805.gi.jpg caption="Sen. Clinton will campaign for her former rival in two states this month, according to the Obama campaign."]

She will hold rallies and voter registration drives in the swing states of Nevada and Florida on August 8 and 21, respectively. Obama won’t attend Friday’s event since he is taking a planned vacation with his family - and it’s not yet clear whether he’ll be at the latter date, which falls just days before the Democratic convention in Denver.

The last time Obama and Clinton were seen together was at a New York fundraiser on July 10, when she told donors, “I’m going to do everything I can and everything I’m asked to make sure he takes the oath of office on January 20th, 2009.”

That fundraiser was one of three the pair have held since Clinton suspended her campaign in early June, and just their second public appearance together.

Obama has said on several occasions that he hopes for both Bill and Hillary Clinton’s help campaigning to win in November.

“I am proud to call [Hillary] my friend, and I know that I desperately need her and Bill Clinton involved in this campaign,” Obama said in New York.

The site, dontgomovement.com, is intended to be a clearinghouse for information about a protest House Republicans began Friday soon after Congress adjourned for its August recess. Instead of heading home to their districts, some House Republicans have remained in Washington and taken to the floor of the House to protest Congress' failure to act on an energy bill.

“They provided the spark but we were the energy that was already out there,” Patrick Ruffini, a founding editor of the conservative Web site thenextright.com, said on a conference call with fellow online activists Tuesday afternoon.

More than 1100 people have signed up for an e-mail distribution list associated with the site since a preliminary splash page for it went up on the Internet Monday, according to Eric Odom, one of the organizers behind dontgomovement.com.

Support for House Republicans has also been active on Twitter, an online micro-blogging service composed of short text messages. The tag “#dontgo” set up by Odom and Ruffini and other activists late last week is currently one of the most popular topics being tracked on search.twitter.com. In addition to the new Web site, Rep. Eric Cantor of Virginia has launched an online petition which has garnered more than ten thousand online signatures so far, according to information available on callbackcongress.com.

The House GOP protest has caught the attention of liberal group MoveOn.org. The powerful liberal lobbying group is scheduled to hold a rally on Capitol Hill late Tuesday afternoon.

Former House Speaker Newt Gingrich, who led the Republican effort to take control of Congress in 1994, has also announced he will be meet and hold a press conference with House Republicans Wednesday at the Capitol.