Barack Obama has a new ad out that tries to tap into Americans' anger over rising gasoline prices. Obama's target is John McCain.

“Every time you fill your tank, the oil companies fill their pockets. Now big oil's filling John McCain's campaign with $2 million in contributions because instead of taxing their windfall profits to help drivers, McCain wants to give them another $4 billion in tax breaks. After one president in the pocket of big oil, we can't afford another.”

Factcheck.org says the actual number is $1.3 million, not $2 million, and the claims about tax breaks for big oil are a little fuzzy.

The fact is both Obama and McCain have flip-flopped on the issue of offshore drilling.\

After several days of tough new ads from McCain’s campaign, the presumptive Democratic nominee holds a 4-point advantage over the presumptive Republican nominee in CNN's average of national polls, up slightly from the 3-point margin he held on Friday.

A week ago, he led McCain by a six-point margin, a reflection of traditionally volatile summer polling.

“The Democrats appear to have blunted any momentum Sen. McCain gained from last week’s ad associating Sen. Obama with Britney Spears and Paris Hilton,” noted CNN Senior Political Researcher Alan Silverleib. “Once again, we are seeing that Obama has a small but durable edge over McCain. It is up to McCain to find a way to change the fundamental dynamics of this campaign.”

Democrats revealed a new Web site Tuesday that looks to detail links between seven of the GOP’s top vice presidential prospects, the man they would replace and the current occupant of the White House.

Election Center: Who could be on the vice presidential short list?

The site, the latest salvo in an unprecedented Web war waged by Democrats this election year, also gives party supporters a chance to be part of local rapid response efforts – including the kind of amateur tracking operations that have dogged candidates this cycle. 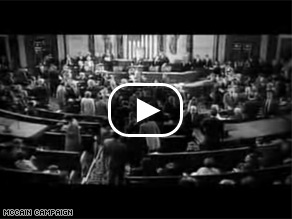 (CNN) - After days of hard-hitting TV and Web ads focused on fall opponent Barack Obama, presumptive Republican nominee John McCain is taking to the airwaves with a positive spot that looks to highlight his maverick roots, and tells voters the nation is “worse off than we were four years ago.”

The latest ad, released Tuesday, does not mention the presumptive Democratic nominee at all, stressing instead the Arizona senator’s independent reputation.

“He's the original maverick. One is ready to lead - McCain.”

The campaign said the ad will air in “key states.”

Kerry: McCain is 'dangerous' for the country

Kerry listed Iraq, Afghanistan, Iran and North Korea as examples of foreign policy issues that he believes Obama has had more foresight on than McCain. He also noted that even the Bush administration has fallen in sync with Obama on several positions recently.

“John McCain is still stuck on the low road express,” said Kerry. “He doesn’t get it. He’s even dangerous, I think, for the direction of this country.”

Kerry accused McCain of repeated flip-flopping and going back on his word of running a clean campaign He also poked fun at McCain’s economic credentials.

“I don’t know if you know this,” joked Kerry, “John McCain is looking for someone for vice president who has more economic expertise than he does. So congratulations to all of you, you’re on the short list.”

END_OF_DOCUMENT_TOKEN_TO_BE_REPLACED

Lehrer, Executive Editor and Anchor of The NewsHour will moderate the first presidential debate between Barack Obama and John McCain September 26 at the University of Mississippi.

Lehrer has been the moderator of 10 presidential debates over the years. The PBS anchor was chosen in 2004 to moderate the first debate between George W. Bush and John Kerry.

Tom Brokaw, who is currently the interim moderator of NBC’s Meet the Press, and anchor of NBC’s Nightly News for 22 years will head the second presidential debate October 7 from Belmont University in Nashville, Tennessee. The format will be town-hall style, in which voters themselves will pose their
questions to the candidates.

END_OF_DOCUMENT_TOKEN_TO_BE_REPLACED

While some of the demonstrations were peaceful, violence erupted at other protest sites. In one instance, riot police fired a water cannon to keep the crowds at bay.

Police said they detained about 80 protesters. They estimated about 2,700 people were participating in the protests, which included a candlelight march and a sit-in. But the organizers said some 10,000 were taking part in the demonstrations.

Bush's week long trip to the region is his ninth visit as president. His stop in Seoul comes just a few months after violent street protests erupted over worries about the safety of U.S. beef imports.

While those tensions seem to have eased, the United States' nuclear disarmament deal with North Korea is also a concern.

END_OF_DOCUMENT_TOKEN_TO_BE_REPLACED

[cnn-photo-caption image= http://i.cdn.turner.com/cnn/2008/images/06/02/art.cheneynpc0602.gi.jpg caption="A Cheney spokesperson said no decision has been made on the convention."]WASHINGTON (CNN) - Will Vice President Cheney be a no-show at the Republican convention in Minnesota?

Republican officials say yes, citing a desire by Sen. John McCain's campaign to turn the page on the Bush-Cheney years. One GOP official told CNN there's a "mutual understanding" between Cheney's office and the McCain camp that he is "unlikely" to attend the convention.

A second Republican official said there are still "talks going on" between Cheney's office and the McCain camp and both sides are "still trying to work it out."

The conservative American Spectator first reported Monday Cheney, who has low national approval ratings but is still popular among conservatives, is not expected to attend the convention.

McCain spokesman Brian Rogers side-stepped a question about whether the Senator has invited Cheney, saying the campaign has "not announced the speakers or any details" about the convention at this point.

Cheney spokeswoman Megan Mitchell also told CNN the details for the convention are still in flux. "His schedule for next week has not even been set-up," Mitchell said, suggesting there has been no final decision on the convention. 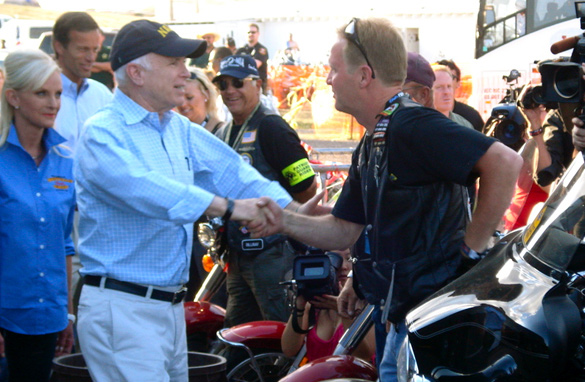 END_OF_DOCUMENT_TOKEN_TO_BE_REPLACED

CNN: Presidential vote could help Dems get 'magic' Senate majority
As if Sen. Ted Stevens didn't have enough problems, Sen. Barack Obama might add to them.

NY Times: Forging Perceptions
If the campaign consultants have their way, 90 days from now roughly half of the electorate will think that John McCain is an angry, nasty and bitter old man. The other half will think that Barack Obama is an egotistical, feckless and immature dilettante.

CNN: Cheney not expected to attend GOP convention
Will Vice President Cheney be a no-show at the Republican convention in Minnesota? Republican officials say yes, citing a desire by Sen. John McCain's campaign to turn the page on the Bush-Cheney years.

CNN Radio: Reps Gone Wild
GOP lawmakers shout, shout, and let it all out – these are the things House Democrats can do without. Meanwhile, John McCain says he also wants Congress back in session, but his staff indicates his own schedule is a problem and, missing: one Barack Obama birthday present. Lisa Desjardins has today's CNN Radio Political Ticker.

TIME: The Tire-Gauge Solution: No Joke
Efficiency experts say that keeping tires inflated can improve gas mileage 3%, and regular maintenance can add another 4%. Many drivers already follow their advice, but if everyone did, we could immediately reduce demand several percentage points. In other words: Obama is right.

NY Times: G.O.P. Drops in Voting Rolls in Many States
Well before Senators Barack Obama and John McCain rose to the top of their parties, a partisan shift was under way at the local and state level. For more than three years starting in 2005, there has been a reduction in the number of voters who register with the Republican Party and a rise among voters who affiliate with Democrats and, almost as often, with no party at all.