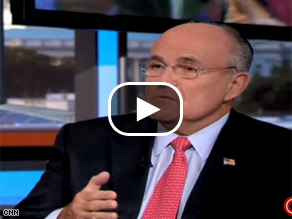 “The reality is either way you might see something like that,” the former New York City mayor told CNN’s Kiran Chetry on American Morning when asked about talk of Sen. Barack Obama choosing a Republican like Sen. Chuck Hagel as his running mate.

Giuliani said he has not spoken with McCain about possibly choosing a Democratic running mate. “But, if you’re asking me is it possible in this day and age that you could have a ticket like that? I think so.”

While he conceded that he could think of “a couple” Democrats who might fit the bill as potential McCain VP’s, Giuliani said the decision was ultimately McCain’s.