Analysis: McCain's VP - who will it be? 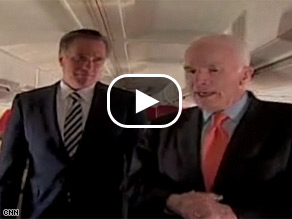 Watch: CNN's Ed Henry reports on what real people in Ohio are saying about the GOP choices for Vice President..

WASHINGTON (CNN) - With John McCain touring Pennsylvania Monday with his good friend and the state's popular former governor, Tom Ridge, the buzz is inevitably building about whom the Republican presidential candidate will select as his running mate.

If chemistry winds up being a key factor for McCain, Ridge has to be high on the so-called short list of veep possibilities - and the fact that Pennsylvania is such a critical swing state doesn't hurt. Plus, as a moderate Republican, picking Ridge could help give McCain even more street cred with independent voters as he tries to re-build the maverick image that faded a bit as he grew closer to President Bush in recent years.

But on the other hand, choosing Ridge could alienate social conservatives because of the former governor's long support for abortion rights. Given the reactions I gathered on my recent trip to another key battleground, Ohio, Republican rank-and-file voters want a conservative to fill out McCain's ticket and help get the party's base to the polls.

Their overwhelming favorite is Romney - not Ridge.

While I was in Lima, Ohio, last week I decided to ask Republican voters waiting on line for a McCain town hall meeting what they think, in order to gauge their passion.

The overwhelming favorite, no question, was former Massachusetts Gov. Mitt Romney. More than a dozen Republicans told me Romney would be McCain's best choice, especially with the economy emerging as issue number one on the campaign trail. "McCain's no businessman," said Sherry Key, adding of Romney: "I think he's good at economics and that's what John McCain needs. It's the only thing he's lacking."

END_OF_DOCUMENT_TOKEN_TO_BE_REPLACED

“Russian President Medvedev and Prime Minister Putin must understand the severe, long-term negative consequences that their government’s actions will have for Russia’s relationship with the U.S. and Europe,” he said.

The presumptive Republican nominee said Americans should be concerned with the “remote, obscure” country because of its commitment to democracy as well as strategically important trade routes and an oil pipeline that flows through Tblisi. He also noted that Georgia was “one of the world’s first nations to adopt Christianity as an official religion.”

He accused Russia of trying to intimidate other neighbors like Ukraine who have sought to strengthen ties with the West.

END_OF_DOCUMENT_TOKEN_TO_BE_REPLACED

Kansas Gov. and Democratic National Convention Committee co-chair Kathleen Sebelius announced in a Monday conference call with reporters that the convention is being termed “America’s Town Hall” - individuals will be able to submit questions by e-mail or Web video. Those questions may be answered by one of the convention’s speakers.

On Monday, Michelle Obama will kick-start the convention at the Pepsi Center in Denver, Colorado with a “One Nation” speech emphasizing unity. Tuesday’s agenda - “Renewing America’s Promise” - will feature Senator Hillary Clinton.

On Wednesday, Obama’s vice presidential pick will deliver his or her acceptance speech – and former President Bill Clinton will address the gathering - as the focus turns to “Securing America’s Future,” and a salute to the nation’s veterans.

Listen: Democrats lay out their convention plans on a conference call with reporters

On Thursday, Obama will officially accept his party’s nomination in front of more than 60,000 spectators at Invesco Field at Mile High. The familiar theme: his campaign slogan, “Change You Can Believe In.”

In 2004, Obama—then a relatively unknown candidate for U.S. Senate - was catapulted into the limelight when he delivered the keynote address at the Democratic Convention in Boston.

McCain advisers are eager to tout the endorsement as the Senator continues to try and show he has crossover appeal as a "maverick," though Gerbounka is clearly not a household name.

Gerbounka, whom Mc Cain advisers describe as a lifelong former Democrat, was elected in 2006 as an Independent. His move to back McCain comes as the Senator ramps up efforts to appeal to independent voters.

New Jersey is one of several battleground states that McCain and Sen. Barack Obama are both pushing hard to win. A recent CNN analysis finds Obama has the edge in the state. 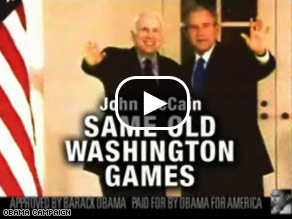 WASHINGTON (CNN) - The battle over who's a celebrity continues.

The ad starts by saying that "for decades, he's been Washington's biggest celebrity. And as Washington embraced him, John McCain hugged right back."

The commercial concludes by saying that the senator from Arizona is "a Washington celebrity playing the same old Washington games."

The commercial appears to be a response to a number of ads that the McCain campaign released over the past two weeks that suggest that Barack Obama is a celebrity and not ready for the White House.

The Obama campaign says its new ad, titled "Embrace," will run in some of the battleground states in which the McCain commercials that ridicule Obama's celebrity are currently airing.

Anytime McCain appears with someone that might be on his vice presidential shortlist, it stirs up a whole new round of speculation. And as Pennsylvania is a key battleground state, Ridge’s trip is getting plenty of attention.

Ridge greeted McCain on the tarmac at Erie International Airport when the candidate arrived. They hugged and chatted briefly before getting in the motorcade. A McCain aide handed Ridge a McCain hat, which he held as they talked.

If the presumptive Republican nominee needed any reminder of Ridge’s prominence, the airport is also named “Tom Ridge Field” in the hometown politico’s honor. The former Homeland Security Secretary grew up in Erie, and began his career there.

They then went to the Smuggler’s Wharf Restaurant on the waterfront in Erie. The two posed for pictures as they sat down with Ridge’s wife Michelle and daughter Leslie.

[cnn-photo-caption image=http://i2.cdn.turner.com/cnn/2008/images/08/10/art.convention.gi.jpg caption="Hillary Clinton and Michelle Obama are slated to speak at the Democratic convention."]

(CNN) – The Democratic National Convention announced its “headline” speakers Sunday, with Hillary Clinton and Michelle Obama each getting a starring role in prime time.

As CNN’s Suzanne Malveaux and Candy Crowley reported last month, Clinton will speak on Tuesday night. That day, August 26th, will be the 88th anniversary of the ratification of the 19th Amendment to the Constitution, which gave women the right to vote.

A statement from the convention called Clinton a “champion for working families and one of the most effective and empathetic voices in the country today.”

Michelle Obama will address the convention in the headline spot on Monday night.

Obama will accept the party’s nomination Thursday night, delivering his acceptance speech away from the convention hall at the larger Invesco Field at Mile High. Sixty-thousand tickets for his speech were given away the first day they were made available. His speech, on August 28th, comes on the 45th anniversary of Dr. Martin Luther King’s “I Have a Dream” speech.

END_OF_DOCUMENT_TOKEN_TO_BE_REPLACED

NY Times: For a Week, McCain Has the Trail to Himself
As Senator Barack Obama headed off for a vacation in Hawaii last week, Senator John McCain was left in the continental United States with the Iowa State Fair to himself.

WSJ Op-Ed: Georgian President Mikheil Saakashvili: The War in Georgia Is a War for the West
As I write, Russia is waging war on my country. On Friday, hundreds of Russian tanks crossed into Georgian territory, and Russian air force jets bombed Georgian airports, bases, ports and public markets. Many are dead, many more wounded. This invasion, which echoes Afghanistan in 1979 and the Prague Spring of 1968, threatens to undermine the stability of the international security system.

END_OF_DOCUMENT_TOKEN_TO_BE_REPLACED

* Sen. John McCain campaigns in Pennsylvania, holding a town hall meeting in Erie and then heading to Harrisburg.