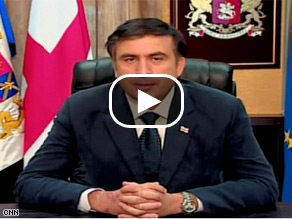 But Saakashvili said action is more important than rhetoric in the face of “brutal” and “deliberate” Russian violence. He urged the United States to take the lead in installing an international peacekeeping force.

“We should realize what is at stake here for Americans,” he said. “America is losing the whole region.”

“What Americans should do know, first of all, clearly make known their intentions,” he said.