Asked by the Associated Press earlier Friday what he though of author Jerome Corsi's new book, "The Obama Nation," McCain said, "gotta keep your sense of humor."

Those comments were immediately slammed by the Obama campaign and the Democratic National Committee, which e-mailed its 3.4 million supporters declaring, "John McCain thinks smears and lies are funny."

"Despite pledging to run a respectful campaign, McCain is just standing by while Corsi and his publisher, former Dick Cheney aide Mary Matalin, poison this presidential race," read the e-mail from DNC Rapid Response Team.

Watch: Is Obama being swift-boated?

But McCain spokeswoman Brooke Buchanan said later Thursday the Arizona senator actually did not hear the question, and would not be commenting on the book.

The book, which is expected to debut No. 1 on the New York Times bestseller list, repeats many long-discredited falsehoods about the Illinois senator, including the claim that he is Muslim.

Corsi, who has said he's on a “mission” to take down Obama, also co-wrote "Unfit for Command" - the 2004 book that spawned the Swift Boat Veterans for Truth attacks against then-Democratic presidential nominee John Kerry.

In the latest episode of CNN=Politics Daily, White House Correspondent Ed Henry reports on McCain's efforts to hold on to the votes of social conservatives and evangelicals; voters that were critical to President Bush's election and re-election.  On the same theme, Carol Costello takes a more personal look at how each man deals with discussing his personal faith in his political life as a presidential candidate.

Senior Political Analyst Bill Schneider goes back to Iowa, where the 2008 presidential campaign began in early January.  The state known for its first-in-the-nation caucus is shaping up to be a November battleground.

Finally, it's Friday so Jennifer Mikell brings you some of this week's most memorable moments from the campaign trail.

In the McCain campaigns new 30-second spot designed to specifically counter the Obama ad, an announcer states it is actually the Illinois senator's policies which will hurt Ohioans the most.

"It's Obama's taxes that will hurt Ohio families," the announcer states. "Higher taxes on your paycheck, your life savings, your electric bills."

The McCain ad echoes another commercial from the campaign released earlier Friday that claims Obama's tax policies will lead to an "economic disaster."

Update 7:25 pm: The Obama campaign released the following statement in response to the McCain campaign's new ad "Maybe": “John McCain would rather distort Sen. Obama’s record than own up to his role in the deal that has put 8,200 Ohio jobs in jeopardy. The people of Southwest Ohio are quickly learning they can expect anything but straight talk from Sen. McCain,” said Obama Ohio Communications Director Isaac Baker. 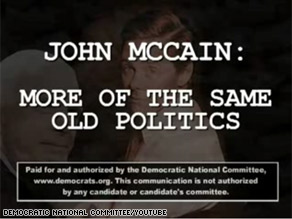 WASHINGTON (CNN) – The Democratic National Committee’s is taking on John McCain in a new Web video calling into question his reputation as a campaign finance reformer and a maverick who stands outside the inner circles of political dealings in the nation’s capital.

The online video accuses McCain of “cozying up” to the “cronies” of disgraced lobbyist Jack Abramoff, who pled guilty in 2006 to federal charges of fraud, tax evasion and conspiracy to bribe public officials.

The video takes issue with McCain’s fundraising ties to Ralph Reed, a former business partner of Abramoff. “While most people now see Ralph Reed as a tainted man raising tainted money, John McCain sees him as a source of campaign cash,” a narrator in the video says.

Reed recently sent out an e-mail that urged Republicans in Georgia to attend a planned Republican National Committee fundraiser for McCain scheduled for next Monday in Atlanta.

The Democratic National Committee said that Rep. Henry Waxman, D-California, will call for McCain to cancel the planned fundraiser in a conference call with reporters on Friday morning.

Update 7:10 pm: Alex Conant, spokesman for the Republican National Committee released the following statement in responce to the DNC's new web video: “It’s laughable Democrats would try to make this a political issue, considering John McCain led the Abramoff investigations and has record of fighting to reform Washington, while Barack Obama’s brief political career already has its own fundraising scandals.”

(full script after the jump)

END_OF_DOCUMENT_TOKEN_TO_BE_REPLACED

Preston on Politics: Can McCain win over social conservatives?

[cnn-photo-caption image= http://i2.cdn.turner.com/cnn/2008/POLITICS/08/15/preston.conservativess/art.mccaingeneric.gi.jpg caption="Sen. John McCain's campaign has downplayed any rumors of discontent among evangelical voters."]WASHINGTON (CNN) - Sen. John McCain stood before a gathering of social conservatives here last fall and acknowledged that he had some work to do to convince them to support his presidential campaign.

"I know that before I can win your vote, I have to win your respect," McCain told attendees of the Family Research Council's Values Voter Summit.

[cnn-photo-caption image= http://i2.cdn.turner.com/cnn/2008/images/08/15/art.mccainsign.ap.jpg caption="McCain and the RNC are well-positioned financially."](CNN) - The Republican National Committee reported Friday it raised $26 million in July, a fundraising haul that nearly matches John McCain's campaign during the same timeframe, and had approximately $75 million cash on hand.

The RNC and the McCain campaign combined began the month of August with $96 million cash on hand, a total that may keep pace with Barack Obama and the relatively cash-strapped Democratic National Committee.

Earlier Friday, the McCain campaign announced it had raised $27 million in July, the presumptive Republican nominee’s largest one-month fundraising total to date. The campaign also said it had $21 million cash on hand, all of which must be spent before the party's convention in early September because of McCain's choice to accept federal campaign dollars. The Republican Party is free to spend its money through Election Day.

The RNC also announced Friday it had surpassed one million individual donors this election cycle, while the McCain campaign said 600,000 individuals had donated to the Arizona senator. Earlier this week, the Obama campaign announced it had passed the two million donor mark.

Barack Obama's campaign and the Democratic National Committee have yet to announce their fundraising hauls for the month of July. For June, the Illinois senator's campaign reported raising $52 million with more than $72 million cash on hand. The DNC raised $22 million during that time period, all of which was available to spend.

Cafferty: Has Hillary taken over the convention?

The Democratic National Convention is shaping into quite some party for Hillary Clinton.

Her name will be placed into nomination. She'll give a prime-time address, introduced by her daughter Chelsea. Her husband, former President Bill Clinton, will get his own plum speaking slot on a separate night. She will also have her own production team to create the introductory video that precedes her speech – the same people who produced Bill Clinton's biography video "The Man from Hope" in 1992.

And, there's now language in the party's platform that refers to the "18 million cracks in the highest glass ceiling," and suggests that media sexism contributed to Hillary's defeat. All this makes it easy to forget that Hillary Clinton is the loser.

Barack Obama and Clinton say they agreed to put both of their names into nomination after weeks of negotiating. It's meant to help unite the party and head off potential embarrassing problems at the convention from Hillary supporters.

[cnn-photo-caption image= http://i2.cdn.turner.com/cnn/2008/images/08/15/art.obamadhl.cnn.jpg caption="Obama’s campaign released its another ad blaming McCain for the potential loss of Ohio jobs."] (CNN) - One week after Barack Obama's campaign released a tough new Ohio radio ad that said Sen. John McCain and his campaign manager Rick Davis were partly responsible for the potential loss of thousands of jobs in the state, the presumptive Democratic nominee launched a TV spot Friday that makes the same charge.

Shipping company DHL is considering moves that would result in the loss of than 8,000 jobs in Wilmington, Ohio. McCain visited the town last Thursday, as workers continued to protest the proposed cuts.

"If DHL - if something happens - it's going to be like a ghost town," says local resident Chris Fisher in the 30-second spot. Morrow, Ohio resident Ed Rutherford tells viewers "I thought I was doing a good job providing for my family. And to have that taken away..." he says emotionally, adding later: "it's tough times. When it's a foreign entity, coming in and sucker punching us. That's how this felt."

"In Washington, John McCain helped pave the way for foreign-owned DHL to take over an American shipping company," says the announcer. "McCain's campaign manager was lead lobbyist for the deal. Now, thousands of Ohio jobs at risk."

END_OF_DOCUMENT_TOKEN_TO_BE_REPLACED

(CNN) - A political action committee organized by Christian voters who support Barack Obama will run an ad this weekend suggesting “the character and faith of each candidate” should be a major factor for religious voters making their presidential pick – and that the presumptive Democratic nominee may hold an edge on that front.

“Barack is a strong man of Christian faith,” Pastor Kirbyjon Caldwell says in first ad from the Matthew 25 Network, airing Saturday during the Saddleback Forum on CNN. Adds Catholic theologian Lisa Cahill, “He understands the pressure that families are under and what it takes to help families thrive.”

The group is hoping the ad helps bolster public awareness of Obama’s Christianity. The presumptive Democratic nominee has repeatedly emphasized his faith throughout the campaign season, as he battled back against false rumors that he is a Muslim.

Obama is the only candidate the Matthew 25 Network has endorsed this election cycle, though organizers have said they hope to expand their reach to other contests in future campaign cycles.

Clinton: 'I'll see you in Denver'

[cnn-photo-caption image= http://i2.cdn.turner.com/cnn/2008/images/08/15/art.hrcdenver.hrc.jpg caption="In an effort to retire her campaign's debt, Sen. Clinton announced a new donor sweepstakes Friday."]
WASHINGTON (CNN) – A day after the announcement that her name will be placed in nomination at the Democratic convention, Sen. Hillary Clinton sent a fund-raising e-mail to supporters that offers a trip to the convention as the prize in her latest donor sweepstakes.

“I cannot wait for the lights to come up and the cameras to roll at the Democratic National Convention in Denver,” Clinton says in the message. “”When I join Democrats from across the country who are unified and ready to get to work to elect Barack Obama, I want you there.”

The message makes two references to Clinton’s outstanding campaign debt, telling supporters “we’re still working hard to pay off all the small vendors . . . . And your help continues to make a huge difference.”

Clinton also used the fund-raising message to announce the winner of an earlier donor sweepstakes that offered dinner with the New York senator and former President Clinton as the prize.

Sen. Barack Obama, the presumptive Democratic nominee, also announced Friday the names of ten donors who won his campaign’s “Backstage with Barack” donor sweepstakes. The ten individuals represent ten different states and a variety of political affiliations. Each will attend two days of the convention along with a guest and will receive airfare to and accommodations in Denver, according to a statement released by the Obama campaign.