Warren: McCain did not violate 'cone of silence'

[cnn-photo-caption image= http://i2.cdn.turner.com/cnn/2008/POLITICS/08/17/forum/art.forum.gi.jpg caption="Warren and McCain camp insist the presumptive Republican nominee had no edge over Obama by going second."](CNN) – Sometimes you just have to take it on faith.

Pastor Rick Warren said John McCain didn’t hear any of the questions in advance at Saturday night’s Civil Forum, even if the candidate was a little late arriving to the pre-arranged quiet room or “cone of silence.”

At the beginning of the forum at California megachurch, Warren told the crowd and TV audience, “I'm going to ask identical questions to each of these candidates, so you can compare apples to apples. Now, Senator Obama is going to go first. We flipped a coin, and we have safely placed Senator McCain in a cone of silence.”

But at 8 p.m. ET, as Warren said that, McCain was actually not in the building. He was just leaving his hotel, with his motorcade arriving at the church nearly a half hour into the event. A. Larry Ross, a spokesman for Warren, says McCain then went directly into the holding room they dubbed the “cone of silence” (in reality, a room with no TV or audio).

Some questioned whether that late arrival might have allowed McCain to hear some of the questions being first posed to Obama.

Warren told CNN Sunday evening, “we flat out asked him” if he heard any of the questions. The McCain campaign “confirmed that McCain did not hear or see any of the broadcast” in the motorcade or after he arrived, Ross said.

When asked if McCain overheard anything, Charlie Black, a McCain adviser who was with him at the time, told CNN: "We were in motorcade until 5:30 p.m. ET; then a holding room in another building with no TV."

Warren said, “I trust the integrity of both” candidates, and said he “knew they would abide by the rules.” He joked McCain may not have been in the cone of silence, but “he was in the cone of a Secret Service motorcade”.

Ross says the whole event only came about because of the relationship Warren has with both men. He said they all agreed to assure a “level field, “McCain would not hear the questions or Senator Obama’s answers.” The pastor spoke to each candidate this week, giving the general themes. Warren decided to tell them each the first two questions in advance, about the three wisest people you know, and the biggest moral failings.

For their part, an Obama spokesperson told CNN’s Mike Roselli they are not pursuing whether McCain heard any of the other questions. They say they assuming McCain had the same information they did.

Richardson: I was a little 'uneasy' about a Clinton roll call 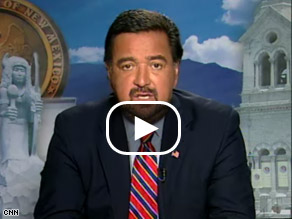 Watch Richardson share his thoughts on the convention and other topics.

(CNN) - New Mexico Gov. Bill Richardson said he’s now comfortable with Sen. Hillary Clinton placing her name in nomination at the Democratic convention, but he admitted he was uneasy about the move at first.

“It's going to be placed in nomination in recognition of the 18 million votes that she got - her historic candidacy. But then she is going to pledge her delegates to Sen. Obama so that it's a unanimous - a unanimous election. That - that gives me comfort,” he said Sunday on CNN’s “Late Edition.”

“Until that had been worked out, I was a little uneasy about there being just a roll call without any transference of that support to Sen. Obama. But the point is the party is united.”

Last week, Barack Obama’s campaign said it encouraged Clinton to put her name in roll call "as a show of unity and in recognition of the historic race she ran and the fact that she was the first woman to compete in all of our nation's primary contests."

Clinton last month suggested that doing so could provide a "catharsis" for her supporters.

Richardson on Sunday called Clinton a “long-time friend” who “ran a great race.”

He and the New York senator were scheduled to hold two private fundraisers Sunday to help retire her campaign debt.

Things got ugly between Richardson and the Clintons after he endorsed Obama in March.

Richardson, who served as secretary of energy in Bill Clinton’s administration, said in April that he was "very close to endorsing" Clinton, but decided not to after the campaign became negative.

"The Clintons should get over this," he said in April.

His endorsement was viewed as an act of betrayal by some longtime supporters of the Clintons. CNN Political Analyst James Carville, who has long and deep ties to both Clintons, even likened Richardson’s endorsement to Judas’s betrayal of Christ.

Richardson responded to Carville’s criticisms by saying that Carville and other Clinton supporters believe they are a “dynasty” and that they were “clinging to the throne.”

Kaine fires back at Rove

(CNN) - It was a tough retort from Gov. Tim Kaine, a Democrat from Virginia.

On CBS' "Face the Nation," Rove jabbed at the governor, saying "again no disrespect to Gov. Kaine. He's been a governor for three years. He's been able but undistinguished. I don't think people could really name a big, important thing that he's done."

The Democratic governor - who is rumored to be on Barack Obama's potential VP list - pointed out that his state was voted best for business three years in a row by Forbes.com and said "maybe Karl Roves and the Republicans don't care about business climate, that would explain why we're in the situation that we're in".

"Governing Magazine was also named Virginia as the top governed state in America," Kaine told reporters, "maybe to Karl Rove that isn't an achievement that would explain a federal government that couldn't respond to a hurricane a Katrina and couldn't figure out how to start and manage a war."

Kaine spoke to reporters in Washington after shooting a televised interview Sunday morning.

By the way, in the 2008 Governing Magazine ranking, Virginia shares its top A- rating with two other states: Washington and Utah.

Scenes from the trail

Sen. John McCain and wife, Cindy, board their plane in California on Sunday. Cindy McCain is wearing a cast because she sprained her wrist last week while shaking hands with an enthusiastic supporter. Photo credit: AP Photo

Did you miss the forum? Catch the replay on CNN

Don't worry - you can catch the whole program on CNN.com.

Hear what Barack Obama and John McCain have to say about abortion, same sex marriages, leadership and faith.

You can also watch a replay of the forum Sunday night on CNN at 8 p.m. ET.

(CNN) - Strengthening Tropical Storm Fay, moving towards the United States, is beginning to have an impact on the campaign trail.

John McCain has canceled a trip to Miami for a fundraiser scheduled for Sunday night because of the storm. Instead, he is flying directly from Long Beach, California, to Orlando, Florida, where he speaks before the VFW convention Monday.

Barack Obama is scheduled to be in Florida Tuesday. No word yet if the storm may affect his plans.

Ironically, McCain had his plans changed by Hurricane Dolly last month. He was supposed to go by helicopter to an oil rig off the Louisiana coast for a high-profile drilling event at the same time Obama was in Europe. But the effects of Dolly in the Gulf caused that trip to be canceled.

[cnn-photo-caption image= http://i2.cdn.turner.com/cnn/2008/images/08/17/art.forum.gi.jpg caption="John McCain, Rick Warren and Barack Obama take the stage together at the forum on faith."]

LAKE FOREST, California (CNN) - From their views on abortion to their greatest moral failings, Sens. Barack Obama and John McCain used much different styles to tackle the same tough questions at Saturday night's forum on faith.

Obama struck a conversational tone and directed his answers toward moderator Rick Warren.

McCain gave straightforward responses, taking a more personal approach as he directed his answers toward the audience and viewers at home.

David Gergen, a senior political analyst for CNN, said he thought both candidates handled themselves well, but he was particularly impressed with McCain's performance.

"Along comes McCain, who not only has - he doesn't like to talk about his religion very much. And then he talks about it openly. But he has a very powerful story that's emotionally connected to the audience," he said.

"It's the candidate who can connect emotionally to Middle America who will have the big advantage going down the stretch."

The event was held at Saddleback Church, a mega-church in southern California. Warren, pastor at the church and author of the best-selling book "The Purpose-Driven Life," interviewed both candidates.

McCain and Obama appeared briefly onstage together, shaking hands and posing with Warren between their one-hour interviews.

Crowley: McCain was on his game

[cnn-photo-caption image= http://i2.cdn.turner.com/cnn/2008/images/08/16/art.mccain2.ap.jpg caption="McCain won over the Saddleback crowd."]LAKE FOREST, California (CNN) - During a break, someone yelled: "We love you John." In fact, McCain was on his game, doing better than I thought he would, given that faith is not his most favorite subject to discuss in public. And in fact, it does seem that the crowd is greeting him every bit as warmly as they did Obama. (Although: as far as I can see, the two Obama supporters who told me they were forced to turn their t-shirts inside out left a while ago.)

Act Two is over - and McCain gets huge applause, and a standing ovation.

LAKE FOREST, California (CNN) - Pretty compelling moment when John McCain was asked about his greatest moral failing and very quietly replied: "the failure of my first marriage." You could have heard a pin drop.

As an aside: McCain was put in a "cone of silence" while Barack Obama was on stage, because he was getting the same questions.

Schneider: A great debate - without the debate

(CNN) - For the most part, John McCain has been coming across as a strong conservative. He's talked unity - but not like Barack Obama, who has made it a central theme of his campaign. Earlier, McCain talked about issues like global warming where he disagreed with his party - but the main message here is that he's a strong conservative, who can be counted on to take socially conservative positions.

Both candidates are doing very well, but you're seeing a very clear difference. Obama has come across as thoughtful, subtle and nimble. McCain is disciplined and conservative, with an emphasis on his personal appeal.

Both are coming across very well in this forum - it's a good format. Strong questions and strong answers, and we see the differences between them clearly - but no squabbling. I'm not sure it would have been better if they were on stage together. This is better than a debate: you get actual answers to the questions, instead of them trying to score points off each other. You get real insight into the way each man thinks.