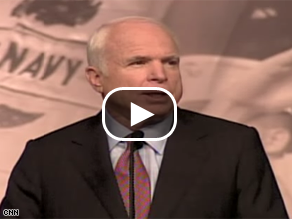 (CNN) - John McCain told a veterans group Monday that Barack Obama had played politics with the Iraq war by trying to “legislate failure.”

“With less than three months to go before the election, a lot of people are still trying to square Senator Obama’s varying positions on the surge in Iraq,” McCain told the Veterans of Foreign Wars Monday at their annual convention in Orlando, Florida.

In recent weeks, McCain has intensified his criticisms of Obama on the war. At the Aspen Institute in Colorado last week, McCain said of his rival: "I think he's wrong, and I think he used the issue of Iraq for political reasons to get the nomination of his party.”

McCain repeated a number of accusations he first issued two weekends ago to the convention of the Disabled American Veterans in Las Vegas, including that Obama tried to “legislate failure” by voting against the May 2007 supplemental appropriations bill, a nay vote that Obama’s campaign said was a protest against the Bush administration’s refusal to include a timeline for troop withdrawal.

The presumptive Republican nominee also hammered Obama on his apparent refusal to admit that the troop surge has succeeded.

“Thanks to the courage and sacrifice of our soldiers, sailors, airmen, and Marines and to brave Iraqi fighters the surge has succeeded,” McCain said. “And yet Senator Obama still cannot quite bring himself to admit his own failure in judgment.”

McCain also continued to push his line on the Georgia-Russia conflict, accusing Moscow of “tyranny” and demanding that Russia be thrown out of the G-8.

“In cooperation with our friends and allies in Europe, we will make it clear to Russia’s rulers that acts of violence and intimidation come at a heavy cost,” he said. “There will be no place among G-8 nations, or in the WTO, for a modern Russia that acts at times like the old Soviet Union. The Cold War is over, the Soviet empire is gone, and neither one is missed.”