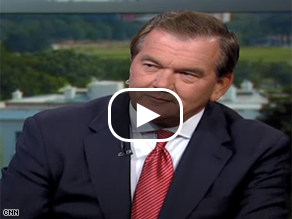 (CNN) - Tom Ridge downplayed the effect his pro-choice views would have in a John McCain administration during an interview with CNN Tuesday, the same day reports surfaced the former Pennsylvania governor is seriously being considered for the bottom half of the Republican presidential ticket.

"Everybody wants to be the vice president," Ridge said. "At the end of the day, you're only giving your private counsel to the president. Publicly you echo the president's position, and I think every vice president understands that and appreciates that's the rule."

"All I know is that my friend of 25 years, John McCain, is strongly and forever pro-life," Ridge also said. "He also believes that you shouldn't be judgmental on other people's point of view with regard to this and some other very difficult issues. And as I said before, I think he'll make the right choice for his vice presidential nominee."

Ridge - who was reportedly on President Bush's VP shortlist in 2000, and rumored to be a potential replacement for Dick Cheney in 2004 - did little to stem speculation he's again among the top picks for the No. 2 spot.

"We'll just have to wait to see, won't we?" he said when asked directly about the possibility.

Ridge's comments come days after McCain indicated he was open to naming a running mate who supported abortion rights, a remark that caused an uproar among many social conservatives already ambivalent over his White House bid.

In the Tuesday interview with CNN's Wolf Blitzer, Ridge also demonstrated his ease with playing the customary VP role of attack dog, hitting back hard against Barack Obama's comments earlier in the day claiming McCain had questioned his patriotism.

"He referred to my friend of 25 years, Senator McCain. I take it very personal. John McCain doesn't question anybody else's patriotism," he also said.