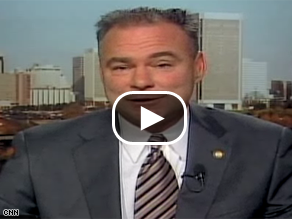 (CNN) - Democrats jumped on a comment by John McCain that seemed to suggest he was unsure of how many homes he owned – the latest move in a series of attacks designed to paint the presumptive Republican nominee as wealthy and out-of-touch with ordinary Americans.

“I understand Senator McCain was asked yesterday this question: ‘how many houses do you own?’ And he couldn't answer that question,” Virginia Governor and VP contender Tim Kaine told CNN’s John Roberts in an interview on American Morning. “He couldn't count high enough to know how many houses he owns.

“We have Americans struggling, with foreclosures skyrocketing in Virginia and elsewhere, gas prices, jobs slowing down and the deficit at a record level. We have to have somebody who can change the direction of this economy. John McCain won't do it, but Barack Obama understands the new economy and he will.”

McCain’s wife Cindy is heir to a beer fortune estimated at roughly $100 million.

When asked about the number of houses he owned in a Politico interview published Thursday, McCain was unable to answer. "I think — I'll have my staff get to you," he replied. "It's condominiums where — I'll have them get to you."

The remark comes days after McCain faced criticism from Obama over a weekend remark at Pastor Rick Warren’s faith forum, where the Arizona senator joked that someone would need to earn $5 million a year in the United States to be defined as rich.

The McCain camp later told Politico the Arizona senator and his wife own at least four homes in three states. Other news organizations have reported a higher total.