[cnn-photo-caption image= http://i.l.cnn.net/cnn/2008/images/01/23/art.cepd.cnn.jpg caption="CNN=Politics Daily is The Best Political Podcast from The Best Political Team."]
(CNN)—When will Obama make the big vice presidential announcement? In the latest installment of CNN=Politics Daily, Senior Political Correspondent Candy Crowley and Senior Political Analyst Gloria Borger discuss the strategy behind the Illinois senator’s decision to wait as long as he has.

Meanwhile: The McCain campaign is actively preparing for Obama’s announcement as well. CNN’s Ed Henry reports on the plans the Arizona senator’s campaign has in place to offset Obama’s decision once it’s revealed.

Plus: there are new developments Friday in the debate over the Iraq War. President Bush and Iraqi Prime Minister Nuri Al-Maliki made progress with a new plan to withdraw U.S. troops from Iraq by 2011. CNN’s Brian Todd has the details.

(CNN) - Democrats may be looking for a big bounce for Barack Obama’s White House bid from next week’s presidential nominating convention in Denver – but in the grand campaign tradition, nobody seems to have higher public expectations for the gathering’s success than Republican rival John McCain's campaign.

His campaign sent a memo to reporters Friday predicting a massive boost for Barack Obama’s poll numbers coming out of the convention. "We believe Obama will see a significant bump, and believe it is reasonable to expect nearly a 15-point bounce out of a convention in this political environment," said McCain Strategy Director Sarah Simmons.

A 15-point bounce would be the second-highest in the history of modern presidential conventions, trailing only former President Bill Clinton’s 16-point bump in 1992.

The convention effect may be hard to read this cycle - John McCain will steal the spotlight hours after Obama is slated to accept the nomination with a massive Ohio rally where he is expected to name his running mate. And the Republican convention kicks off just two days later.

In their response to the McCain memo, the Obama camp avoided making any predictions of their own. “Presidential races are close, and we expect this one to be no different. But they should figure out how to spin the fact that John McCain owns a dozen houses and thinks the fundamentals of our economy are strong before trying to spin our convention.”

END_OF_DOCUMENT_TOKEN_TO_BE_REPLACED 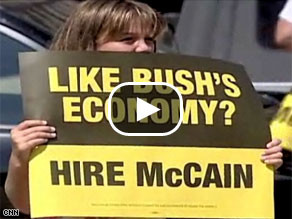 Watch footage of the protest in Virginia Friday.

ARLINGTON, Virginia (CNN) - Supporters of Democrat Barack Obama held a press conference outside John McCain's Arlington, Virginia home with signs reading, "Like Bush's economy? “Hire McCain" and "I have 1 house." Democrats have been attacking McCain as out of touch after he told an interviewer he was unsure of how many houses he owned.

A few blocks away from McCain's headquarters, a handful of the presumptive Republican nominee’s supporters came out to counter-protest, with signs that read "Obama's housing – shady deals" and "Obama buys houses from felons." The McCain campaign released an ad yesterday that highlights Obama’s past relationship with convicted Chicago developer Tony Rezko. 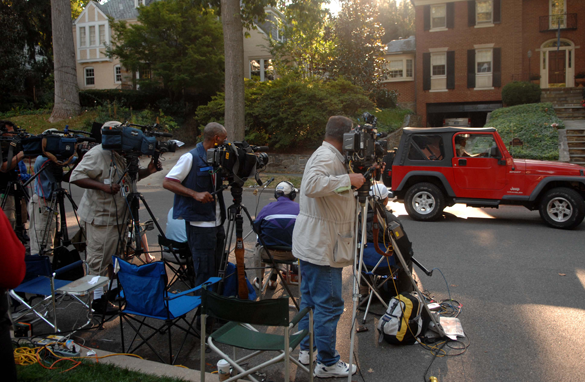 Edwards also told CNN Obama has not spoken to him in recent days about his VP choice.

GOP will run ads in Spanish during Democratic convention

The 60 second-ad will run during the week of the Democratic National Convention in the Mile High City as well as air on stations that reach reach Hispanic listeners in Colorado Springs, Pueblo, Aspen, Fort Collins and Greeley.

The ad will also run in New Mexico on stations that reach listeners in Albuquerque and Las Cruces as well as Las Vegas, Nevada and El Paso, Texas.

END_OF_DOCUMENT_TOKEN_TO_BE_REPLACED

What does this man know?

(CNN) - He likely knows whether or not he will be the next Democratic vice presidential nominee, but Indiana Sen. Evan Bayh isn't talking.

Speaking briefly to reporters staked outside of his Washington, DC home, a casually-dressed Bayh revealed little information, and thanked reporters for being patient.

"You've been very patient, thank you for being here all night," Bayh, who said he had been taking his two 13-year-old sons to camp, told the gathered press corps without a hint of irony.

Asked if he had any news to report, Bayh replied flatly, "It's not mine to report."

CNN's Jessica Yellin reported earlier Friday Obama has informed those on his VP shortlist - which presumably includes Bayh - of his decision.

Obama ad paints McCain as 'out of touch'

[cnn-photo-caption image= http://i2.cdn.turner.com/cnn/2008/images/08/22/art.mccaincart.cnn.jpg caption="New Obama ad uses footage of McCain being driven in a golf cart by former President George H.W. Bush."](CNN) - Barack Obama’s campaign continued to slam John McCain for his house-counting gaffe Friday with a new ad and a dozen events in nationwide – mainly in fall battleground states - designed to paint McCain as wealthy and insulated from the nation’s economic woes.

“Call it ‘Country Club Economics,’” says the announcer in the new ad. “How many houses does he own? John McCain says he can't even remember anymore.

Watch: Obama ad portrays McCain as 'out of touch'

“Well, it's seven. No wonder McCain just said the fundamentals $5 million a year is middle-class.” After a pause, the announcer continues: “Maybe McCain thinks this economy is working...for folks like him. But how're things goin'...for you?”

Yesterday, Obama himself said that McCain’s remark revealed a “fundamental gap of understanding” between McCain’s world and “what people are going thru every single day here in America.”

The 30-second spot is Obama’s second to hit McCain on the remark in two days, and his sixth negative spot in the past three days. It is being launched as the campaign holds events designed to highlight McCain’s comment across the country, including Missouri, Minnesota, New Hampshire, Massachusetts, Michigan, Ohio, Pennsylvania and Montana.

John King: Do the Democrats have an August curse?

[cnn-photo-caption image= http://i2.cdn.turner.com/cnn/2008/images/08/21/art.obama.virginia.jpg caption="August has not been a friendly month to Democrats."](CNN) - That’s probably not the best way to put it, but in elections they have lost, Democrats often look back and view August as a wasted or just plain horrible month.

In 2004, for example, John Kerry led most national polls heading into August; his biggest lead was in the five-point range. But by early September, some surveys had President Bush up by as many as 10 points.

The Democratic collapse of 20 years ago is the stuff of legend. Michael Dukakis was up 17 points in some national polling after his July convention, but that lead started to fade in August and in the end Dukakis won just 10 states.

[cnn-photo-caption image= http://i2.cdn.turner.com/cnn/2008/images/08/22/art.mccainad0822.cnn.jpg caption="New McCain ad again hits Obama on taxes."](CNN) - John McCain’s campaign released its second tax ad of the week that calls Barack Obama a spendthrift celebrity who does not have to worry about a family budget.

The spot comes a day after McCain grabbed headlines for his inability to immediately recall how many homes he owns.

“Celebrities don’t have to worry about family budgets, but we sure do,” says the announcer in the 30-second spot. “We’re paying more for food and gas, making it harder to save for college, retirement.