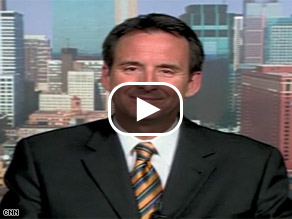 (CNN) – Less than a day after the Obama campaign put out a new ad about Sen. John McCain’s recent inability to state the number of houses he owns with his wife Cindy, Minnesota Gov. Tim Pawlenty is defending the presumptive Republican nominee.

“Barack Obama made over $4 million last year, has his own million-dollar home in Chicago that involved some dealings with a pretty shady character,” Pawlenty said Friday on American Morning making a reference to Obama’s ties to convicted Chicago businessman Tony Rezko. “And now you have him saying he’s more in touch with the common person in the United States than John McCain?,” Pawlenty asked rhetorically. “I mean, give a break. Give me a break.”

Pawlenty told CNN’s John Roberts that McCain “was trying to be accurate” when he told journalists recently that McCain’s staff could answer a question about how many homes the McCains own. “He has a home he lives in Washington, two in Arizona and one in California.”

“But it gets more complicated than that,” added Pawlenty “because Cindy’s family has family homes.” “And some of those other homes are not for the exclusive use of Sen. McCain.”

Pawlenty also told Roberts that he did not think McCain had forgotten how many homes he owns.

The Minnesota governor is widely regarded as being on McCain’s short list of potential running mates.