[cnn-photo-caption image= http://i2.cdn.turner.com/cnn/2008/images/08/25/art.carvillecnn.jpg caption="Carville says the Democrats are hiding the party's message."](CNN) - Have the Democrats wasted the first night of the convention?

Speaking on CNN, Carville said the party was too soft in its attacks on John McCain Monday night - the same mistake, Carville says, Democrats made at the 2004 convention.

"The way they planned it tonight was supposed to be sort of the personal - Michelle Obama will talk about Barack Obama personally, Ted Kennedy was a very personal, emotional speech," Carville said. "But I guarantee on the first night of the Republican Convention, you're going to hear talk about Barack Obama, commander-in-chief, tax cuts, et cetera, et cetera."

"You haven't heard about Iraq or John McCain or George W. Bush - I haven't heard any of this. We are a country that is in a borderline recession, we are an 80 percent wrong-track country. Health care, energy - I haven't heard anything about gas prices," Carville also says. "Maybe we are going to look better Tuesday, Wednesday, and Thursday. But right now, we're playing hide the message."

Carville also said the party needs to do a better job of communicating its message to the American people.

“If this party has a message it's done a hell of a job hiding it tonight, I promise you that," he said.

[cnn-photo-caption image= http://i2.cdn.turner.com/cnn/2008/images/08/26/art.michell1.ap.jpg caption="Michelle Obama rescued the night, Gergen says. "]The Democrats should be enormously grateful to Michelle Obama: after a very slow start to the convention, punctuated by a moving tribute to Teddy Kennedy and his own rousing speech, the first evening was in danger of becoming an entirely lost opportunity. But Michelle rescued it.

She was extraordinary, talking in ways that were both conversational - always welcome in people's living room - but also inspiring. She spoke in ways that reached out to people of all backgrounds. Democrats should be both proud and grateful.

It is impossible to know whether how many people will accept her message. To a significant degree, that is of course because she represents such a departure from the traditional order of things in America. She represents a new future - of women who are not only devoted mothers and wives but also highly educated, caring people ... and, yes, African-Americans, Hispanics, and people of many diferent backgrounds. One day the country will be there. Is it prepared to be there now? I'm frankly not sure. We are living through one of the most important chapters in the American story

Pledge of Allegiance
Koby Langley
From Fort Mead, Maryland, he received the Bronze Star for leadership in the US Army Credited with design & implementation of 1st Foreign Torts Claims Policy Act – Iraq

Remarks/Video
The Honorable Eleanor Holmes Norton
Non-voting Member of the US House of Representatives, District of Columbia

END_OF_DOCUMENT_TOKEN_TO_BE_REPLACED

KANSAS CITY, Missouri (CNN) – Hands cupped under his chin as he sat in a family’s living room, Barack Obama smiled as they watched Michelle Obama introduced on their television screen.

Obama held a short photo-op at the beginning of his wife’s address to the convention. He was in the home of a family in battleground Missouri, the candidate sitting in between on a couch in front of the television.

“This is nerve-wracking,” he said, as the Girardeau family laughed.

As his wife took the podium, Obama relaxed a bit, and said “she looks pretty cute.”

END_OF_DOCUMENT_TOKEN_TO_BE_REPLACED

DENVER, Colorado (CNN) - Michelle Obama took center stage at the Democratic National Convention on Monday night, stressing her love for the nation and making her case for why her husband should be the next president.

"I come here as a wife who loves my husband and believes he will be an extraordinary president," she said of her husband, Sen. Barack Obama of Illinois, the presumptive Democratic nominee.

Michelle Obama - who could be the nation's first African-American first lady - pushed a theme of unity in light of controversial comments she made on the campaign trail that raised doubts about her patriotism.

"All of us are driven by a simple belief that the world as it is just won't do - that we have an obligation to fight for the world as it should be," she said, closing the first night of the convention.

Rosen: Michelle hits it out of the park

[cnn-photo-caption image= http://i2.cdn.turner.com/cnn/2008/images/08/25/art.rosen.cnn.jpg caption="Hillary Rosen is a CNN contributor. "]DENVER (CNN) - Wow. That was impressive. The poise, the energy, the dignity, the intelligence and the pride! I think she hit it out of the park. How do I define the home run?

Given her personal story, the Republicans won't suceed in future attacks on her patriotism. This woman beamed her pride in her American opportunity. Women can relate to her modern struggle of caring for her children and constantly worrying about their future.

"A current of history meets a new tide of hope."

[cnn-photo-caption image= http://i2.cdn.turner.com/cnn/2008/images/08/25/art.michelle0825.gi.jpg caption="Sen. Obama's wife, Michelle, was the headliner on Monday night."]
DENVER (CNN) - This is the first time most Americans are getting any sense of who Michelle Obama really is. She’s a very poised and accomplished speaker, a real professional. She’s talking about her personal background, her family life — not much about her career.

The stereotype was the picture on the cover of the New Yorker magazine, which portrayed her as a black radical. There’s very little reference to race in this speech - almost no racial themes. This is an unusually effective performance. She’s like a great actress — not that she’s acting. It’s just a very good performance, and a very sincere one. And it’s very gracious for her to mention Hillary Clinton.

I think the Democrats are looking at this speech and thinking: This is a future candidate. 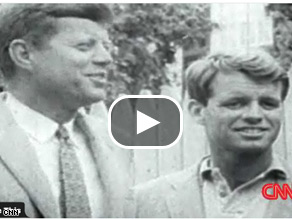 Watch: A tribute to the life and dedication of Senator Ted Kennedy.

(CNN)– Watch as Caroline Kennedy introduces her uncle- Senator Ted Kennedy and a tribute to his life and nearly 50 years in public life.

Gergen: Where have they been hiding Craig Robinson?

A few minutes ago, James Carville said the Democrats have been hiding their message tonight - and I think he was on the mark.

But Craig Robinson, Michelle's brother, has helped to put things back on track. His basketball analogies about Barack Obama was some of the best validation we have heard about the candidate in this campaign. Now Michelle has opened up well with a basketball note... that connects with voters. The Democrats need to make this fellow more visible... now on to Michelle's message.

[cnn-photo-caption image= http://i2.cdn.turner.com/cnn/2008/images/08/25/art.four.gi.jpg caption="The Democratic speakers tonight are more liberal than mainstream America, Castellanos says."]Senator Kennedy's speech is going to be one of the highlights of the evening if not the entire Democratic Convention.

But it also demonstrates one of the challenges facing Barack Obama.

They are not change. They are classic, old school "make Washington bigger" Democrats.

Let's see if the Obama campaign chooses to reverse that and regain the mantle of change this week.