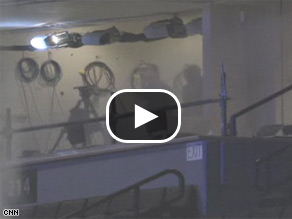 Watch: A fire breaks out in a media skybox at the Pepsi center in Denver, site of the Democratic National Convention

DENVER (CNN) - A Fox crew setting up inside the Pepsi Center early Monday morning – where the Democratic convention officially kicks off tonight – set off the arena’s sprinkler system, dousing their equipment.

A FOX spokeswoman has not yet returned a request for comment.

Watch: The hazards of convention coverage