Live from the CNN Grill

DENVER (CNN) - Tonight the CNN Grill was hopping with appearances by Oscar winning actors, Tony award winners, comedians, NBA Hall of Famers, and U.S. political royalty. Sir Charles Barkley chatted up Ashley Judd at her table while Charlize Theron enjoyed the light breeze outside on the patio with beau Stuart Townsend. Tony award winner Idina Menzel, also sat down for a bite at the table next to Ashley Judd. Repeat customer Maria Shriver sat at her table from Monday night. Chad Hurley, YouTube founder, hobnobbed with his fellow celebs.

Earlier in the day, Rosario Dawson, Hill Harper and the band Death Cab for Cutie all swung by for a visit.

Over and over again, I have heard that the Clintons only care about themselves. What we saw tonight is that Hillary Clinton cares a great deal about her party and her country, too. As both Governor Rendell and Candy Crowley have said on the air tonight, she posed exactly the right question to her supporters: were you in this just for me or were you in this for the larger causes? Isn't that the right question for Democrats?

What do you think? Would welcome your thoughts.

Schneider: A tough speech from a tough woman 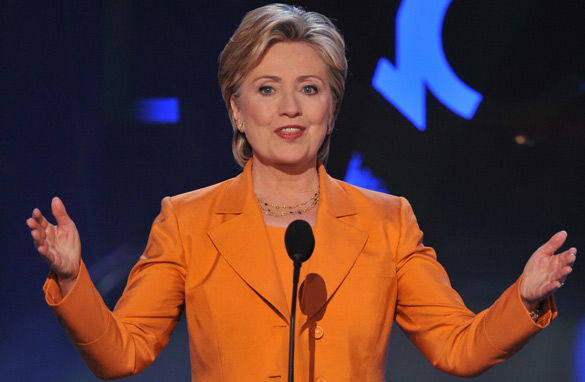 Convention delegates greeted Clinton with a standing ovation. (Photo credit: Getty Images)
DENVER (CNN) - "Four more years of the last eight years." That’s a strong effort to refocus this campaign as a referendum on the Bush record. And to make the case that McCain equals Bush. These delegates are thrilled. The election has been in danger of becoming a referendum on Obama instead of the Bush record.

Hillary’s speech is what used to be called a spellbinder. Or a stem-winder. Whatever.

This woman is tough. She burnished that reputation in the campaign. She never stopped fighting and never gave up - and drew enormous admiration for it.

A lot of Democrats wonder if Obama is this tough.

Clinton speech a work-in-progress until the last minute

DENVER (CNN) - Hillary Clinton's speech was a work-in-progress until the last minute, a Clinton aide tells CNN: speech-writers pulled an all-nighter and rushed it into the teleprompter. The video tribute to the New York senator was also a last-minute affair, and barely got done in time.

Schneider: A red meat speech for a hungry crowd

[cnn-photo-caption image= http://i2.cdn.turner.com/cnn/2008/images/08/26/art.hill.clinton.jpg caption=" Hillary Clinton addresses delegates at the Democratic National Convention."]
DENVER (CNN) - This is the closest thing to a red meat speech this convention has gotten. And man, are these delegates hungry.

"No way. No how. No McCain" is likely to get picked up.

The Clintons have always been devoted to the cause of stopping the Republican right. It’s the message that unites Clinton and Obama supporters.

Castellanos: Warner the 'next Democrat'

[cnn-photo-caption image= http://i2.cdn.turner.com/cnn/2008/images/08/26/art.mark.warner.jpg caption="Former VA Governor Mark Warner gave the keynote address at the DNC in Denver."]
A powerful speech from Mark Warner, who is going to come out of this convention as the "next Democrat," much like Barack Obama himself emerged from the Democratic convention four years ago.

The election Obama can win is not one about who has the experience to lead the world in the most dangerous moment in history - That's the election we Republicans would like.

Watch: Waner says this is 'the most important contest' of our generation

The election Obama can win is a race between the past and future, and Warner framed that election better than anyone else this year except perhaps Barack Obama himself.

What he didn't tell us is that behind the new rhetoric, there are still the same old industrial age policies: Warner closed his budget gap in Virginia by persuading liberal republicans to join him in raising taxes. Today Obama promises just the same.

Gergen: The past vs. the future

[cnn-photo-caption image= http://i2.cdn.turner.com/cnn/2008/images/08/26/art.warnerm.jpg caption="Mark Warner delivers the keynote address during the Democratic National Convention in Denver."]
A moment ago, I had an opportunity to offer some views on air about Mark Warner's keynote address - always a privilege to be here on CNN. While no barn burner - so it probably didn't play well in the hall - and offering almost no red meat, I thought it was actually very effective because it introduced some fresh thinking about the future, offering hope that we can work our way out of this economic mess. Politics has too often dismissed the importance of technology, science and education.

Just after, Alex Castellanos turned to the rest of us here on the NY panel to say that if this becomes a race about the past vs. the future, the Democrats might have a much better chance of winning. I think he is right on target. We so much need as a people to move beyond the arguments of the past in finding the best path to the future.

I have been a critic of the convention choreography for a lot of the past two nights. But I join others in saluting a party that helps us to face the future and tries to draw upon the talents of all Americans, not just a favored some.

Giuliani: Hillary 'a no brainer' for VP 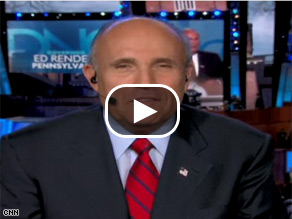 "I just think that they made a big mistake in the choice that they made," Giuliani told a CNN panel at the Democratic National Convention. "It's a no-brainer. [Hillary Clinton] got 18 million votes, Joe [Biden] got 9,000 votes...The normal political thing to do in terms of the best decision to make to win would have been to pick Hillary Clinton," Giuliani said urging the presumptive Democratic nominee to give an explanation to unhappy Democrats.

Giuliani has been an outspoken supporter of the presumptive Republican nominee John McCain since abandoning his own presidential bid - emphasizing the Arizona senator's talking points on various political broadcasts.

Last week, during his first conference call as a surrogate for McCain, the former New York mayor had a difficult time when the subject veered away from the intended foreign policy talk. Giuliani accused Daniel Kurtzer, an Obama adviser and former U.S. ambassador to Israel of engaging in a freelance “mission” to Syria - accusations at which the Obama campaign quickly fired back.

Asked Tuesday night if he would draw contrast between the two parties during his keynote address next week at the Republican National Convention, Giuliani said you can expect him to do exactly that.

"I'm sure there will be comparisons," Giuliani said. The choice is between "John McCain who has tremendous experience who has worked on both sides of the aisle, against a senator from Illinois [who is] one of the least-experienced candidates we ever had for president."

Giuliani is expected to be part of a news conference Wednesday, during the Democratic National Convention to discuss "why Barack Obama is wrong on national security," according to a media advisory.

Scenes from the floor: Standing room only

[cnn-photo-caption image= http://i2.cdn.turner.com/cnn/2008/images/08/26/art.dncc.flag.jpg caption="It’s a full house at the Pepsi Center in Denver, Colorado."]
DENVER (CNN) - The convention floor here at the Pepsi Center is closed. People are amassed, waiting to enter, however there is no access at this time. The crowd is standing room-only now as they await Hillary. Michelle Obama and Joe Biden are perched in the VIP seats.

Scenes from the floor: The Bidens arrive