DENVER (CNN) - Brian Schweitzer is a genuine political character. And a very successful Democratic governor in a deeply red state. His picture probably appears in the dictionary under the definition of "populist.’’

Schneider: So far, Warner's not hitting the high notes

[cnn-photo-caption image= http://i2.cdn.turner.com/cnn/2008/images/08/26/art.mwarner.jpg caption="Former Virginia Gov. Mark Warner delivered the keynote address tonight."]
DENVER (CNN) - Not a lot of music so far in this keynote speech. Warner was not asked to be an attack dog. He was asked to address the theme of common ground (former Democratic governor, Republican state). But compare this speech with another keynote speech with the same message: Barack Obama, 2004. That was stirring. This is competent, but rather flat.

We will hear that line again.

"Four more months’’ is pretty good line, too. Bob Casey’s was the first speech to focus squarely on the Bush record.

[cnn-photo-caption image= http://i2.cdn.turner.com/cnn/2008/images/08/26/art.bill.jpg caption="Bill Clinton will reportedly not attend the convention Thursday night."]
DENVER (CNN) - Hillary Clinton will be on hand for Barack Obama's acceptance speech, but according to a source close to former President Bill Clinton, he will not: the source tells CNN that Clinton will not join his wife at Invesco Field Thursday night.

[cnn-photo-caption image= http://i2.cdn.turner.com/cnn/2008/images/08/26/art.casey.jpg caption="Sen. Robert Casey Jr. D-Pa., speaks at the Democratic National Convention in Denver."]
Finally a memorable phrase from this convention - Bob Casey calling McCain not a maverick but a sidekick. That's what the Democrats need, something simple and easy to remember.

[cnn-photo-caption image= http://i2.cdn.turner.com/cnn/2008/images/08/26/art.ball.cnn.jpg caption="Barkley spoke with CNN Tuesday."]That conversation on CNN with the basketball star Charles Barkley was one of the single best testimonials to Barack Obama that I have seen here at the convention. He showed that one can be low key and be even more effective sometimes than if you are bombastic. I Would welcome your views.

In the meantime, it has been revealing (again) to read the many comments that voters are registering on the CNN Web site. Some of them have been pretty sharp. Please know that we try to read them hear - even
when they hurt!

Schneider: Democrats on the defensive

DENVER (CNN) - The Democrats have been put on the defensive on the energy issue because of McCain’s call for more drilling. What’s the Democrats’ response? You heard it from Secretary Pena just now: renewable energy means more American JOBS.

Crowley: Sebelius gets an enthusiastic reception

Scenes from the trail: Long lines on Tuesday night 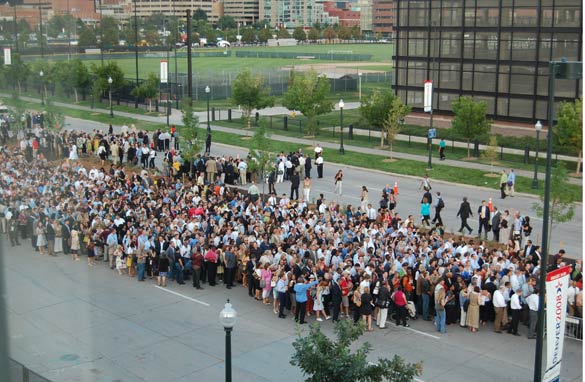 Long lines formed outside a security checkpoint as delegates tried to enter the Pepsi Center for the second night of the Democratic National Convention. (Photo credit: Martina Stewart/CNN)

Castellanos: Will Clinton acknowledge her failings?

[cnn-photo-caption image= http://i2.cdn.turner.com/cnn/2008/images/08/26/art.hillary.jpg caption="Clinton takes the stage tonight, vowing to unite Democrats."]
I often teach young campaign managers what I view as "The Laws of Politics."

One of them is "The Law of the Ketchup Stain" - When your candidate walks into the room with a stain on his or her shirt, no one is going to listen to a word they say until it is acknowledged.

Everyone knows Hillary Clinton is going to support Barack Obama, that's not the stain on her shirt. Rather, the "ketchup stain" is that she has said Obama is inexperienced and unprepared to be president. She's got to acknowledge what every Democrat has heard her say.

How does she do it? She must say, "I know you've heard me say things in the competitive heat of battle that may cause some of you to have doubts about my support for Obama. I know that and you know that. Let me put those doubts to rest. I'm not only going to do everything I can do to elect Obama, I am going to ask you to help me, with all your heart, with all your soul, with all your energy. If you believe in Hillary Clinton, believe in Obama, support him. Elect him president."

Will she do it? The Clintons have never been very good at acknowledging their failings. Unless she does, however, her support of Obama will be seen by many Democrats as a choice between the lesser of two evils - the appearance that she supports Obama only because he is not as bad John McCain.