Crowley: The Obama team battles back on GOP barbs 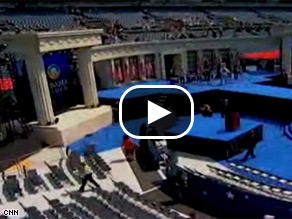 DENVER (CNN) - Camp Obama is stinging over Republican barbs that the stage tonight, surrounded by thousands of spectators, is "the Temple of Obama."

His campaign manager came out to say GOP has it all wrong — that Obama wanted as many people as possible to be involved in this night because the election is about them. I think. Also gave some hard sell on how to get involved. Obama-ites are all over the place, passing out volunteer cards.