[cnn-photo-caption image= http://i2.cdn.turner.com/cnn/2008/images/08/28/art.stadiumfull0828.ap.jpg caption="Sources tell CNN's John King more than 90,000 people may be in Invesco Field to witness Sen. Obama's acceptance speech."]
DENVER (CNN) – The McCain campaign has suggested Sen. Barack Obama is little more than a substance-less celebrity. The size of the crowd gathered to watch Obama formally accept his party’s nomination may do little to dispel that line of attack.

“They will have more than 85,000 people, perhaps more than 90,000 people, in this stadium by the time Barack Obama speaks,” Chief National Correspondent John King said Thursday evening. “There is a concern that the Obama campaign may have issued as many as 20,000 more tickets for this event” than the stadium can hold.

Local authorities are working with the Secret Service to get as many people into the stadium as possible. But there is a concern that several thousand people could be turned away.

In addition to the tens of thousands present in Invesco Field, millions of Americans across the country will be watching Obama on television and online.

Toobin: Gore's not a great orator, but still a hero to many

[cnn-photo-caption image= http://i2.cdn.turner.com/cnn/2008/images/08/28/art.gore2.gi.jpg caption="Gore is still a hero to many, Toobin says."]Al Gore is a poignant figure for many Democrats. The 2000 election is by now a long time ago, and the memories of the Florida recount are fading for many. But not for everyone.

I just wrote a book about the Supreme Court called The Nine, and I was struck by how fresh the wounds of Bush v. Gore still are for many people.

Watch: Gore: 'We must seize this opportunity'

Justice Antonin Scalia, who voted for Bush, is fond of saying that the losers in that case should "just get over it." Many still haven't.

As we saw today, Al Gore is not a great orator. But he's a hero to many - and many still believe he was robbed in 2000.

(CNN) – John McCain’s campaign is keeping a close eye on Tropical Storm Gustav as it heads towards the Gulf Coast and Republicans begin the trek to St. Paul, Minnesota, to nominate McCain for president.

“John McCain has always been sensitive to national emergencies,” McCain spokesman Tucker Bounds said. “In 2000, Senator McCain delayed announcing his candidacy because of the situation in the Balkans. We are monitoring the situation very closely.”

Gustav struck Jamaica just short of hurricane strength. The storm is expected to reach the Gulf of Mexico as a Category 3 hurricane Monday or Tuesday, triggering alerts across the U.S. Southeast. There are particular concerns that Gustav could strike New Orleans which is still rebuilding from devastation caused by Hurricane Katrina three years ago.

Gergen: Some thoughts as we wait for Obama

- This is indeed an historic occasion as an African American becomes the nominee of a major political party, and there is good reason for all Americans - not just Democrats - to celebrate the racial progress we have seen. But I also believe that Martin Luther King Jr. would be the first to tell us that we have still not reached the day when we look beyond the color of one's skin and instead look to the content of their character. To me, one of the biggest questions of this campaign is how many votes Obama may lose because he is black. (to be fair, he will also win some votes because he is black). From my perspective, it is impossible to measure right now. One top GOP strategist told me privately that he thinks it will cost Obama 4-6 points nationally. That sounds very high to me. But I am very curious what you think.

Watch: Gore says Obama is a chance for a new beginning

- So far, my sense is that this convention has been very helpful to Obama and the Democrats. The party finally seemed to come together last night, and much of the credit belongs to both Clintons. At a moment of personal pain, they put a smile on their faces and came out four-square for Obama. To be sure, there have been a lot of hours spent early each night without much of significance occurring (why not shorten these conventions to two nights?), but the closing hour to an hour and a half each night has been highly successful - a series of first class speeches by Michelle Obama and the two Clintons. Too early yet to measure the political impact, but Gallup tracking is reporting tonight that so far– half-way through last night - Obama has enjoyed a 6 point bounce. We'll see. Curious again about your view.

Watch: Lewis: 'We stil have a dream'

- In the meantime, we are also awaiting the Republicans. There are several signs tonight that John McCain may be choosing Tim Pawlenty as his running mate. We will all have a lot to say about that if it occurs - strikes me as a "safe" choice (popular 2nd term governor of Minnesota, social conservative, blue collar roots) but if the Republicans believe that a key requirement for going to the White House is whether you are "ready" to be commander in chief, the question arises: Pawlenty? What do you think. (Please know that other names are floating wildly and that there is some talk that John McCain may wish to postpone the convention if the storm grows in the Gulf).

Here comes Al Gore, so will leave things here. But again, would welcome your thoughts.

The columns...it's all a bit much, say conservatives

The descriptions of the transformation of Denver's Invesco Field peppered the Republican blogosphere hours before Barack Obama was set to address a dancing, jubilant crowd of 76,000 supporters on the Democratic National Convention's final night.

The conservative online magazine The American Thinker remarked that the stage made use of the "basic stagecraft of visual illusion."

"He has 300 foreign policy advisers - and for his convention speech, a football stadium equipped with a movie set that looks like a Greek temple," nationally syndicated radio host Rush Limbaugh wrote on his blog Thursday. "He claims to be the one that 'we have been waiting for,' and he can lower the seas and promise and deliver universal love simply by showing up."

[cnn-photo-caption image=http://i2.cdn.turner.com/cnn/2008/images/08/28/art.ap.gore.dnc.jpg caption="Al Gore spoke to the crowd Thursday."]
DENVER (CNN) - Al Gore walked in, and the feet-stomping, flag-waving crowd went crazy. Now an Oscar and Nobel Prize winner, he is garnering the kind of excitement he struggled to get during his presidential bid in 2000. A source says Gore has offered to campaign for Obama, and that he will.

Watch: Gore explains why he thinks the race is close

DAYTON, Ohio (CNN) - It is unclear if John McCain has notified his running mate yet, but planned Denver media appearances by Minnesota Governor Tim Pawlenty, thought to be a top contender, were abruptly canceled Thursday so he could back to head back to Minnesota, an aide said.

Pawlenty’s appearances were canceled by the Republican National Committee, which had invited him to Denver to act as a McCain surrogate during the Democratic convention.

Another VP contender, former primary season rival Mitt Romney, is traveling in California and attending private events, including fundraisers. There was no indication he has received word either way yet from McCain, according to sources close to the former Massachusetts governor.

END_OF_DOCUMENT_TOKEN_TO_BE_REPLACED

[cnn-photo-caption image= http://i2.cdn.turner.com/cnn/2008/images/08/28/art.brimley.ap.jpg caption="McCain joked he has chosen Wilford Brimley to be his VP."]

DAYTON, Ohio (CNN) - John McCain appears to be comfortable with the selection of his running mate, whoever that person may be.

Upon arriving in Dayton, Ohio, Thursday evening, the presumptive Republican presidential candidate was asked on the airport tarmac who he has selected for the No. 2 job.

McCain has been very coy in responding to reporters’ questions about his vice presidential selection process, most recently remaining quiet when asked, or simply raising his thumbs in the air. The candidate’s offbeat joke about Brimley, the 73-year-old actor known for his roles in Cocoon, Our House, and diabetic health commercials, likely reflects the state of ease he is currently experiencing as the months-long search for a running mate is over.

That is, if he was joking. 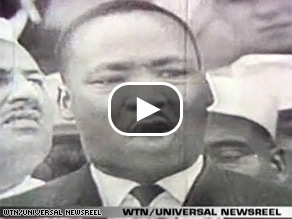 Obama will deliver his speech 45 years to do the day that Rev. Dr. Martin Luther King, Jr. gave his landmark “I Have a Dream” speech on the steps of the Lincoln Memorial. As the first African-American nominee of a major political party, Obama is viewed by many as the fulfillment of the vision set forth by King.

Watch: 'We still have a dream'

But, in addition to addressing the lofty, historic nature of his candidacy, Obama also plans to draw clear contrasts between himself and his rival Sen. John McCain.

[cnn-photo-caption image= http://i2.cdn.turner.com/cnn/2008/images/08/28/art.ap.cheryl.crow.jpg caption="Sheryl Crow performed for the crowd Thursday."]
DENVER, (CNN)–Will.i.am, John Legend and Sheryl Crow in that order. Down on the field, in a semicircle around the platform where Obama will speak, two rows of volunteers from each state. No state or elected officials. Grassroots folks.

Watch: Crow plays for 'a change'

They will be no more than 30 feet away from Obama.

The sun has gone down behind the stadium now and it has gotten much cooler.

The stadium’s still not full but it’s getting there.