Scenes from the Trail: The line starts early at Invesco 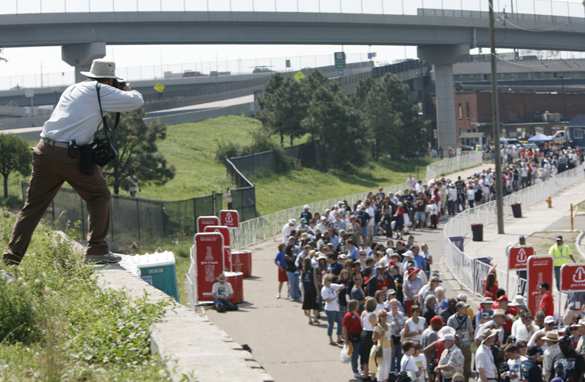 Denver (CNN) - Charlie Dominguez is spending his 47th birthday standing in line at Invesco Field hoping he will be able to count a ticket to Sen. Barack Obama's Thursday night acceptance speech among his birthday gifts.

"It's just to be close," Dominguez said. "Everybody's electrified. I want a chance for the glimpse, ya know?"

Dominguez, who hails from traditionally-red Kansas, said he was always a registered Republican until this year when he switched his registration to Democratic.

A few ticket-holders and would-be attendees arrived at Invesco Field by 9 a.m. By noon, the line for entrance included roughly a thousand people, a reporter estimated.