Palin mum on what she reads

[cnn-photo-caption image= http://i2.cdn.turner.com/cnn/2008/images/09/26/art.palin.gi.jpg caption="Sarah Palin was mum when asked what publications she reads."]
(CNN) - Sarah Palin has had a sometimes-tense relationship with the media since being named to the Republican ticket – so reporters have been wondering: which news outlet does get her seal of approval? Where does she get her news?

In an interview broadcast Tuesday night, Katie Couric Palin which newspapers and magazines she had regularly read in the past to “stay informed and to understand the world?”

Replied Palin: “I’ve read most of them again with a great appreciation for the press, for the media…”

The Alaska governor declined to get specific when pressed by Couric to name a specific publication. “Um, all of them, any of them that have been in front of me over all these years,” she said.

Asked again which news organizations she was referring to, Palin told Couric she had “a vast variety of sources where we get our news.

“Alaska isn’t a foreign country where it’s kind of suggested that things like ‘Wow, how could you keep in touch with the rest of what Washington DC may be thinking and doing when you live up in Alaska. Believe me, Alaska is like a microcosm of America.”

No major newspaper or magazine has yet gotten the ultimate seal of approval from Palin: her much-sought interviews since becoming the Republican nominee have gone to the nation’s television networks.

[cnn-photo-caption image= http://i2.cdn.turner.com/cnn/2008/images/09/30/art.couric.cnn.jpg caption="Palin told CBS' Katie Couric she represents 'new energy.'"](CNN) - Sarah Palin said she was not taking a jab at Joe Biden's age or lengthy stint in Washington when recently joking she had been listening to the Delaware senator's speeches since the second grade.

"Oh no, it's nothing negative at all," Palin told Katie Couric Monday in the latest installment of her Monday interview with the CBS anchor. "He's got a lot of experience and just stating the fact there, that we've been hearing his speeches for all these years."

The original comments came at an Ohio rally Monday, when Palin told the cheering crowd, "I'm looking forward to meeting [Biden] too, I've never met him before - but I've been hearing about his senate speeches since I was in, like the second grade."

Some political observers found that comment peculiar, given her own running mate is the oldest man ever to seek a first presidential term. But Palin said she was merely contrasting the differences she sees between herself and Biden.

"He's got a tremendous amount of experience and, you know, I'm the new energy, the new face, the new ideas and he's got the experience based on many, many years in the Senate and voters are gonna have a choice there of what it is that they want in these next four years," she said.

Palin was 8 years-old when Biden was first elected to the Senate in 1972. (Biden was 29 at that time)

WASHINGTON (CNN) - The Senate plans to vote on the $700 billion bank rescue plan Wednesday evening - two days after the House failed to pass it.

The bill adds provisions - include raising the FDIC insurance cap from $100,000 to $250,000 - and will be attached to an existing revenue bill that the House also rejected Monday, according to several Democratic leadership aides.

The vote is scheduled for after sundown, in observance of the Jewish holiday. Republican presidential nominee John McCain and Democratic nominee Barack Obama and his running mate Joe Biden confirmed that they would be present for the vote.

Democratic sources told CNN that they expect bipartisan support for the bill. Because tax bill must originate in the House, the Senate is attaching the rescue plan to a bill that deals with renewable energy tax incentives.

This would allow the Senate to vote before the House to approve a bailout bill.

Fact Check: Obama and the 'fundamentals' of the economy

[cnn-photo-caption image= http://i2.cdn.turner.com/cnn/2008/images/09/30/art.webadstrong.yt.jpg caption="The McCain campaign called Sen. Obama a hypocrite in a web video released Tuesday."]
The Statement: In a Web video released Tuesday, September 30, the McCain campaign points out that Obama attacked McCain after McCain said repeatedly in mid September that the fundamentals of the economy are "strong." The video then uses a clip from an Obama speech in which Obama says, "We've got the long-term fundamentals that will really make sure this economy grows." The narrator says, "Strong fundamentals? Is Obama saying McCain's right? Or is Obama saying his own attacks are shameless? Either way, Obama's a hypocrite."

END_OF_DOCUMENT_TOKEN_TO_BE_REPLACED

Fact Check: Did McCain warn about Fannie, Freddie 2 years ago?

END_OF_DOCUMENT_TOKEN_TO_BE_REPLACED 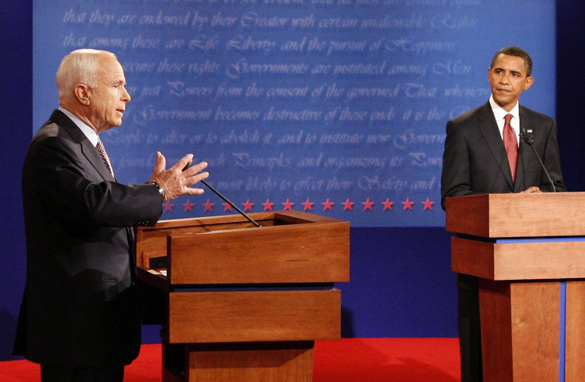 The first presidential debate did little to change the dynamics of the presidential race, new polls show. (Getty Images)

(CNN) - Nearly 60 million Americans tuned in to the first presidential debate between Barack Obama and John McCain last Friday, but national polls released this week suggest the square-off did little to change the dynamics of the race.

The new polls are bad news for McCain, who with only five weeks until Election Day is quickly running out of opportunities to shake up the race for the White House.

In a new CNN poll of polls consisting of surveys conducted entirely after the first presidential debate, Obama holds a 5-point lead over McCain, 48-43 percent. That's exactly where the race stood immediately before the two candidates kicked off the presidential debate season in Oxford, Mississippi, four days ago.

But the poll numbers come even as surveys conducted by several media organizations immediately after the debate showed most viewers thought Obama had won. However the polls also showed the debate viewers appeared to be more Democratic than the overall population.  (Related: CNN analysts grade McCain, Obama debate performances)

"Unfortunately for McCain, a continuation of the status quo favors Obama," Silverleib also said. "The pressure is increasing on McCain to find some way to change the fundamental dynamics of this race. He can’t afford to walk away with a tie in the remaining debates.”

McCain and Obama next square off October 7 in a debate that features a town-hall format - a set up that McCain favors. VP candidates Sarah Palin and Joe Biden have their only debate on Thursday.

[cnn-photo-caption image= http://i2.cdn.turner.com/cnn/2008/images/09/30/art.billcad.cnn.jpg caption="The McCain campaign is highlighting a recent Clinton interview in a new ad."](CNN) - As he gears up to hit the campaign trail on behalf of Barack Obama later this week, former President Bill Clinton is the star of a new television ad - for John McCain.

The Arizona senator's campaign is highlighting Clinton's remarks in an interview with ABC News last week during which he appeared to lay some of the blame of the current economic crisis on congressional Democrats.

"I think the responsibility that the Democrats have may rest more in resisting any efforts by Republicans in the Congress or by me when I was president to put some standards and tighten up a little on Fannie Mae and Freddie Mac," Clinton said in the ABC News interview that is highlighted in the new McCain ad.

The announcer of the one-minute spot called "Rein" cites McCain's call for more regulation of Fannie Mae and Freddie Mac two years ago and said "Democrats blocked the reforms."

"Loans soared. Then, the bubble burst. And, taxpayers are on the hook for billions. Bill Clinton knows who is responsible," the announcer also says.

But in the same interview with ABC, Clinton also said it is important not to assign blame at this time for the current state of the economy: "We are where we are. I think the most important thing is we got two candidates for president saying 'lets try to minimize the partisan differences,'" he said. "We will have plenty of time later to look at who caused this and what mistakes were made."

Those comments did not make it into the McCain ad.

The ad comes days after some Democrats grumbled the former president appeared to be overly praiseworthy of the Arizona senator as the final stretch of the heated presidential campaign gets under way. In the same interview with ABC News, Clinton defended McCain's call to possibly push back the first debate, saying it was a pledge made in "good faith." He also later said the Arizona senator had taken the lead in his party when it comes to climate change.

Cafferty: Are Palin’s interviews with Couric helping her?

That segment of the Cafferty File was posted on YouTube and as of today has received more than one million, one hundred thousand hits.

END_OF_DOCUMENT_TOKEN_TO_BE_REPLACED

ON THE TRAIL: Obama rally in Reno

[cnn-photo-caption image= http://i2.cdn.turner.com/cnn/2008/images/09/30/art.cnnlive.cnn4.jpg caption="Obama campaigned in Reno Tuesday."]RENO, Nevada (CNN) - Barack Obama held a rally in Reno Nevada earlier Tuesday, during which he called for Congress to pass a new version of the economic bailout bill.

"While there is plenty of blame to go around and many in Washington and on Wall Street who deserve it, all of us now have a responsibility to solve this crisis because it affects the financial well-being of every single American," he is expected to say. "There will be time to punish those who set this fire, but now is the moment for us to come together and put the fire out."