Anti-war protestors take to the streets in St. Paul 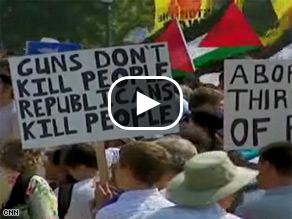 Watch as CNN's Joe John's reports on the anti-war protestors in St. Paul.

(CNN) – Upwards of 5,000 anti-war protesters marched peacefully outside the site of the Republican National Convention in St. Paul Monday, but some anarchists in the group threw newspaper stands and bus benches into the streets as well as broke storefront windows.

Police dressed in riot gear and some on motorcycles chased them around the city blocks to the amusement of several onlookers.